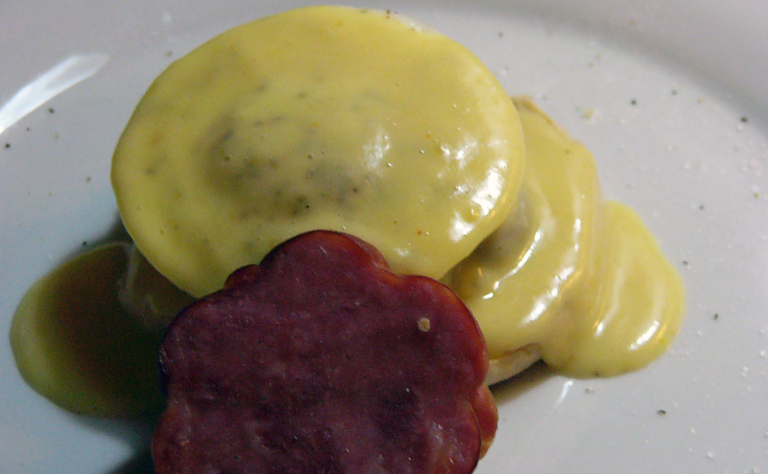 To begin with, in my ignorance of its history, I foolishly assumed that Eggs Benedict was born either in England (the English Muffin) or Canada (the bacon). It just goes to show that you can’t always judge a book by its cover. A great example would be Chicken Francese. While the name sounds French, the dish was originally created by an Italian chef in New York as a way of luring customers back to the Italian eateries in Brooklyn. The once popular neighborhood establishments were loosing their customers as French Bistros gained popularity among the masses. Chicken Francese sounded very French, and did the trick.

So what are the true origins of Eggs Benedict? Like so many dishes, it all depends upon who you listen to as there are several popular stories. Two in particular I find interesting. According to a Foodimentry Magazine publication in April 2012, a Wall Street broker, suffering from a hangover, ordered some buttered toast, crisp bacon, two poached eggs and a hooker of Hollandaise Sauce. He did so in 1894, at the famed Waldorf Hotel in New York. The chef, impressed by the combination,  later replaced an English Muffin for the toast and ham for the bacon, adding it to his breakfast and luncheon menus. Another popular theory dates Eggs Benedict to the 1860s, at the Delmonico’s Restaurant, the very first restaurant in the United States. Chef Charles Ranhofer is credited with creating the dish to satisfy Mrs. LeGrand Benedict, a regular patron of the restaurant. It seems Mrs. Benedict found nothing to her liking on the menu and had a discussion with Chef Ranhofer. He then came up with the dish, including the muffin and ham. Chef Ranhofer later published his recipe in his cookbook The Epicurean in 1894. What is most interesting about these two accounts in the common thread in that Chef Ranhofer was once a part of the staff at Delmonico. Whatever the tale might be, one thing is clear – Eggs Benedict is an American dish – born in New York. 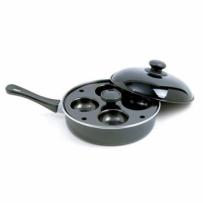 Would you believe that I had never tasted, let alone cooked, Eggs Benedict until 2014. One of the reasons was that I still cannot properly poach an egg. (Thank goodness for a pan I bought that does it for me). The other reason is that I did not like the idea of an egg swirling about in water until it was somewhat cooked. I suspect the reason for my dislike for poached eggs has more to do with my inability to poach an egg in the first place. I end up creating this awful mess in a pan that is in no way appealing. I only wish that Eggs Benedict were portable as I would love to serve them to my extended family during one of our Brunch gatherings.

Place egg yolks into a blender. Add mustard, lemon juice and a pinch of pepper. Cover and blend for about 5 seconds.

In a 1-cup glass measuring cup, heat butter in the microwave for about 1 minute, or until completely melted and hot. (The key here is hot).

Set the blender on high-speed. Temper the egg mixture by adding 1 teaspoon of hot butter at a time until about 1 tablespoon has been worked into the eggs, about 15 times.

With the blender still running, slowly stream in the remaining butter. With the constant spinning of the blender blades and the slow cooling of the butter, the sauce should begin to thicken almost immediately. To keep the sauce war, simply place the blender container in a pan of hot tap water until ready to serve.

Split English Muffins and place in the toaster to lightly toast.  Once muffins are toasted, place on a baking sheet.  Spread a little butter on each muffin.  Cover with foil and hold in a warm oven until ready to assemble.

Meanwhile, in a small sauté pan over medium-high heat, melt the remaining butter. Add the ham and cook until golden, about 2 minutes per side. Keep warm.

Fill an egg-poaching pan with 1/2 inch water, set the pan over medium heat and bring to a simmer. Lightly brush the poaching cups with a little butter and crack an egg into each cup. Cover and cook until the whites are firm and the yolks are glazed over but still soft, about 3-4 minutes, or until done to your liking.

Place 1 muffin half on each of 4 warmed individual plates. Top each muffin half with a slice of ham, an egg and some of the sauce. Serve immediately.

This is wonderful with some breakfast potatoes and fresh fruit for a light yet satisfying start to a new day.