Kiddo has tossed a salad. Hubby has mashed the potatoes. The table on the back patio is set for three. I love summer evenings, don’t you? Oh to the simple things . . .

END_OF_DOCUMENT_TOKEN_TO_BE_REPLACED

At first, I felt very intimidated when I sat down to plan a special menu for MLK Day. After all, I am viewed as a white woman by the world around me. My father is a mix of native American and Irish-English decent. My mother came from Filipino-Spanish ancestry with a dash of Chinese for good measure. While I consider myself to be a Heinz-57,  I am perceived as a white woman. An old white woman who can still remember a time when “Whites Only” was the norm. An old white woman whose education began in a school without “color” and all the faces looked like mine. What could I possible understand about honoring a man of such greatness?

END_OF_DOCUMENT_TOKEN_TO_BE_REPLACED

Cube Steak is one of those cuts of meat that is best served in some sort of gravy or kept moist under a mound of vegetables such as in this beautiful Italian rendition. Recently I served up a cube steak family favorite, Cube Steak with a Golden Mushroom Sauce. As always, it was a big hit. Cube steak is also the best choice for a down-home country favorite, Chicken-Fried Steak. As a fan of this versatile cut of beef, I knew this Italian rendition would be another family favorite.

Just for the record, cube steak is usually cut from the top round or top sirloin. The cuts are then tenderized using a meat tenderizer or run through a machine that punches holes into the meat. The mechanical tenderizer is called a meat cuber or swissing machine. and the resulting steak is know as a cube or Swiss steak because of the cube-shaped indentations made by the machine. While it is true that the cut of meat is traditionally taken from the Round, in reality it can be made using any tough cut of beef. When buying your cube steak, be sure to examine it carefully. Some cuts are riddled with streaks of gristle or overly fatty. Can you make your own cube steak? Sure. The electric machine is expensive, the crank or hand-held variety will give you a workout. While there are chefs out there that swear by cutting your own meats, I actually looked into getting a hand-held model. The biggest drawback is that they are all difficult to clean and meat can become lodged between the razor-sharp blades. Besides, with a little care in shopping or a conversation with your butcher and you can bring home a nice cube steak.

In a large skillet, heat oil over medium-high heat. While the skillet is heating, cut onion and bell peppers into strips. Set aside until ready to cook.

When the skillet is hot, sauté the peppers and onion. As the vegetables cook, season generously with garlic powder, Italian seasoning, salt and pepper. Continue to sauté for 5 minutes. Remove to a plate and set aside.

Add the cube steaks to the same skillet and cook 5 to 7 minutes, or until browned, turning once.

Add the tomatoes to the skillet . Bring to a boil, reduce heat to low, and simmer for 15 minutes. Return peppers and onions to the skillet and continue to simmer another 10 minutes or until meat is tender.

Transfer to a serving platter and serve.

This delicious Italian steak can accompanied by a bowl of steamed rice, linguine with butter or for something a little extra, serve with Herb Risotto. A nice salad would round out the meat perfectly.

e no idea why I have been excited to try this new recipe I picked up while visiting Joyously Domestic. The recipe was originally posted to her blog back in 2013; which shows you how behind I am at working my way through my vast collection of recipes. Once my collection reached over 4,000 recipes; I quit counting. (But not collecting). Anyhow; when it came time to sit down and put together the meal planner for the week, I came across this recipe and suddenly I was excited. It’s simply, cooks in a crock pot, and yet there was something magical about it. Maybe it’s the use of Golden Mushroom Soup. The very idea of cubed steak smothered in not one but two Campbell Mushrooms soups is so . . . dare I say it . . . retro.  And therein lay that magical comfort in a world that at times seems spinning out of control. An old friend was returning – Campbell soup – and the thought got my heart to pitter-patter.

Growing up, nearly everything we ate was truly from scratch or home-grown.  However; when I ventured out on my own for the first time, a great deal of what I cooked came from a recipe found on the side of a can of Campbell’s soup. Working nights, attending school during the day, with two small children in the house, I needed all the short-cuts I could find.  This recipe reminded me of my younger by-gone days, and that warmed this old heart.

This dish is definitely a throwback to comfort foods of the past. It is saucy, beefy and simple. Very reminiscent of Shepherd’s Pie when served over a bed of mashed potatoes. Yeah, Shepherd’s Pie up-side-down would best describe the taste and texture. My guys really enjoyed the flavors, and that’s always a plus in my book.

Melt 1 tablespoon butter in a large, heavy-bottomed skillet set to medium-high heat.  Lay bag containing seasoned flour flat on the counter, open end toward you. Working in batches (about half the steaks) place 1 cube steak at a time into the bag and dredge in flour, shaking off excess. Place into skillet to brown. Repeat until skillet is full without being over-crowded (about 4 steaks). Brown for about 3 minutes, turn and brown other side for about 3 minutes. Remove from skillet and set aside.

Add the other 1 tablespoon of butter to the skillet.  Allow to melt, then repeat the browning process with the remaining steak.

Once all steaks are browned, return the now empty skillet to stove top and add in both cans of soup.  Stir with a wooden spoon to combine, then add in milk and beef stock.  Stir to incorporate and bring to a gentle simmer.  Be sure to scrape up any brown bits remaining in the bottom of the pan from browning steaks with your spoon.  Season with salt and pepper to taste.  Stir in the sliced mushrooms.

Cover and cook on low for 7 – 8 hours.  Serve over mashed potatoes. 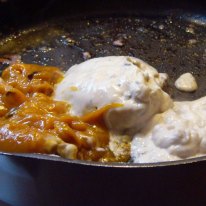 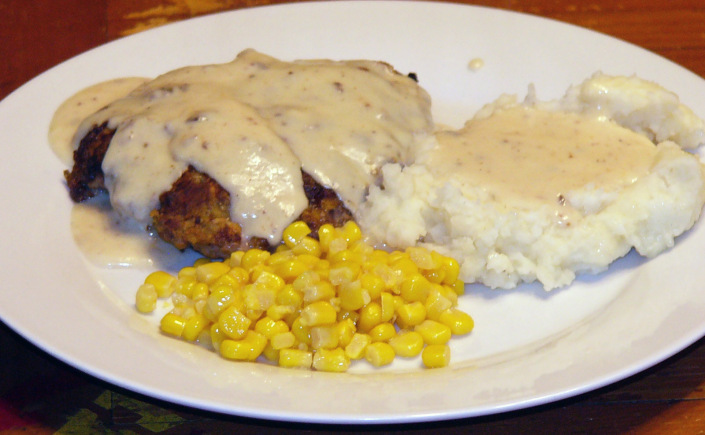 Maybe it’s because all the winter holidays (Thanksgiving, Christmas, New Year’s Eve spent at home surrounded by loved ones) are behind us, leaving thoughts that are filled with fond memories of family that I’ve had a craving for all things “down home”. All I know is that I have been yearning for some good, old fashion home-spun cooking and nothing screams home-spun louder than simple Southern suppers. (And this from a Yankee no less). It could also be because today is Ash Wednesday, and cravings naturally rear their ugly head whenever something is “forbidden” – like meat for instance. Or a big, filling meal.

Which brings me to the burning question – is it Chicken-Fried or Country-Fried Steak? Are the two interchangeable names for the same dish? Are the differences a “Southern” thing, depending upon which part of the south you hail from or is there really a difference? As it turns out, the answer to all these questions is yes, depending upon who you ask. Some food historians claim the names are a regional thing – “Chicken-Fried” steak as it is commonly called in Texas, Arkansas, Missouri and Oklahoma, is a pan-fried steak served with gravy. While in Alabama, Kentucky, Mississippi, and the Carolinas, “Country-Fried” steak is on the menu.  And that much is correct – be it Chicken-Fried or Country-Fried, it’s generally a cheap cut of meat that has been pounded, coated and pan-fried. Above all else, the pan-fried steak is always served with gravy.  The concept of Country-Fried Steak is thought to have been brought to the Southern United States by German immigrants in the mid-1800’s. The name “country-fried steak” goes back at least that long, while the name “chicken-fried steak” has only been around since around the mid-20th century.

Besides the names, it turns out that there are other subtle difference between the two. Country-Fried Steak is moistened with milk, dredged in seasoned flour and then pan-fried. When the steaks are finished, a brown gravy is created in the skillet, and the steaks are returned to the pan cook a bit longer in the gravy. Sometimes caramelized onions are included as part of the gravy – similar to Salisbury Steak gravy. Chicken-Fried Steak on the other hand is double-dipped in seasoned flour, with the use of egg as part of the breading process. The peppery gravy accompanying Chicken-Fried Steak is creamy, made with milk rather than beef broth, and can be served over the steaks or on the side. Personally, I like my Chicken-Fried Steak smothered in gravy, with more on the side. And a big helping of mashed potatoes and buttery corn. Oh, and maybe some biscuits with honey butter or a big pan of cornbread. Now we’re talking . . .

To the flour, add 1 teaspoon each salt, pepper and paprika. Mix well.

Season both sides of cube steaks with additional salt and pepper, if desired.

Dip cube steaks in milk, then dredge in seasoned flour.

Dip floured steaks in egg wash, then again in the seasoned flour.

Brown the cube steaks on each side, about 8-10 minutes total cooking time; remove from heat and set the steaks aside. (A platter in a warm oven works well).

If skillet is oily, drain oil without removing the brown bits left behind from the steaks. Add butter to the skillet and allow the butter to melt without browning. Sprinkle 3 tablespoons of flour over the melted butter to make a roux, and cook for a few minutes on low heat. Do not allow roux to burn.

Increase heat to medium-low and slowly add the remaining 3 cups milk, and stir or whisk constantly until mixture comes to a boil and thickens. Lower heat and continue to cook for a few minutes longer, until the desired gravy consistency is reach. Season well with pepper.

Remove steaks from oven, smother with about half of the gravy, reserving the other half for the potatoes.