When I whipped up these burgers for my Mini Burger Bites for a Super Bowl party a few years back, those little burgers received rave reviews from even the most critical burger eaters among us. So juicy and packed with flavor, Hubby suggested next time we grill up burgers, that we use the Bite Burger recipe to make “real” burgers. Why not? They are awesome no matter the size. In our house, these burgers have become a Daytona 500 tradition.

Let’s turn our attention for a moment to the bun spread and its strange name – James Rutter Hamburger Spread. James Rutter is the name of my Junior High School (back in the day when it was called “Junior High” and not “Middle School”). At lunch, the cafeteria sold these thin burgers wrapped in paper. We would unwrap the burgers and devour them – with their tangy sherbet-orange colored spread oozing from the bun. Thank goodness for that orange goodness, because the thin (mostly filler) burgers were rather dry and needed all the help they could get. The orange spread rocked! Brother Dear (bless his heart) bought me a burger almost every day because he knew I was addicted to the burgers simply for their spread. I was the older sister, hanging out with the older kids, and Brother Dear was the shy younger brother. He would run up to my circle of friends, avoiding eye contact, and shove a paper-wrapped burger into my hand before running off again.At the time, I took his silent, quick appearance for granted. Looking back, I wish I had taken the time to say thank you and tell him how much I loved him.

While attending James Rutter, I joined the school newspaper. My assignment each week was (of all things) Cafeteria News. As with all school sponsored newspapers, our “stories” were fluff pieces intended to rally school spirit. Everything we wrote was censored before print. Needless to say, when I wrote a piece about the cafeteria burgers, all references to the fact that the burgers were lot of filler and very little meat received a red line – a big “no-no”. Rather than lie, I skipped over the burgers completely and wrote a nice fluff piece about the spread. While I don’t remember the piece itself, I do remember the spread. It came in giant orange cans already made up, and the cafeteria workers simply opened a can, spread the thick orange sauce over the buns, slapped the “burgers” on top, wrapped everything in paper and that was about all there was to it. Out they went to the hungry masses. My biggest question when interviewing the head of our cafeteria was “what’s in the stuff spread over the burgers”. She told me the basics – mayonnaise, ketchup, mustard, onion powder and dill pickle relish, although no “measurements” were given. But then, who wanted to make a giant can of the orange stuff enough to feed an entire school?

Years later, Kiddo asked if we could whip up a special, secret sauce for a barbecue he was hosting at the end of second grade with his friends. (I haven’t a clue where the need for a secret sauce came from). I asked if he meant a Big Mac sauce (figuring I could “cheat” a little since we had Thousand Island dressing in the fridge), he said no. He wanted to make our own sauce. That’s when I remembered the sauce from Junior High. (The biggest difference between Thousand Island dressing and James Rutter spread is that one uses sweet pickle relish, the other dill pickle relish, and the use of yellow mustard). We played around with the ingredients, trying different combinations, until the color and taste was “just right”. It’s one of Kiddo’s favorite burger “toppings” to this very day. He has always been a big fan of “secret” sauces for his food. When he was a toddler, the only way he would eat green beans was to have me make a “secret” dipping sauce for his beans. It’s nothing more than 3 tablespoons of mayonnaise with about a teaspoon of Lemon Pepper whipped into the mayonnaise. Green Bean dip is yet another “sauce” from his childhood that he continues to eat as an adult, although he will eat green beans without the magical sauce for veggies that are green.

Divide meat ball in half, forming two balls. Divide each ball in half again, form into a ball. Each ball will create a half-pound burger. Flatten into patties slightly larger than the buns. The patties can be prepared in advance, layered with wax paper between each burger and refrigerate until ready to cook.

Place patties on griddle to sear the outside. Turn griddle down to 350-degrees and to fry for 8 minutes per side or until cooked through.

Cooking Options – On the Grill – Best Choice for that charbroiled Flavor

Heat grill until hot (or build a fire). Grill burgers about 6 minutes per side, depending upon heat from fire. If more time is needed, continue to until cooked to your liking.

While the burgers are cooking, lightly brush cut sides of buns with a little melted butter. Heat buns, cut side down, on a flat griddle or pan until lightly toasted. Keep warm until ready to assemble.

Spread top and bottom of the cut side of each bun with James Rutter Sauce (recipe below). Then build your burgers any way you like – with grilled onions or raw red onion slices. Crisp green lettuce leaves, thick slices of tomatoes. For easier handling, you might want to slice the burgers in half. 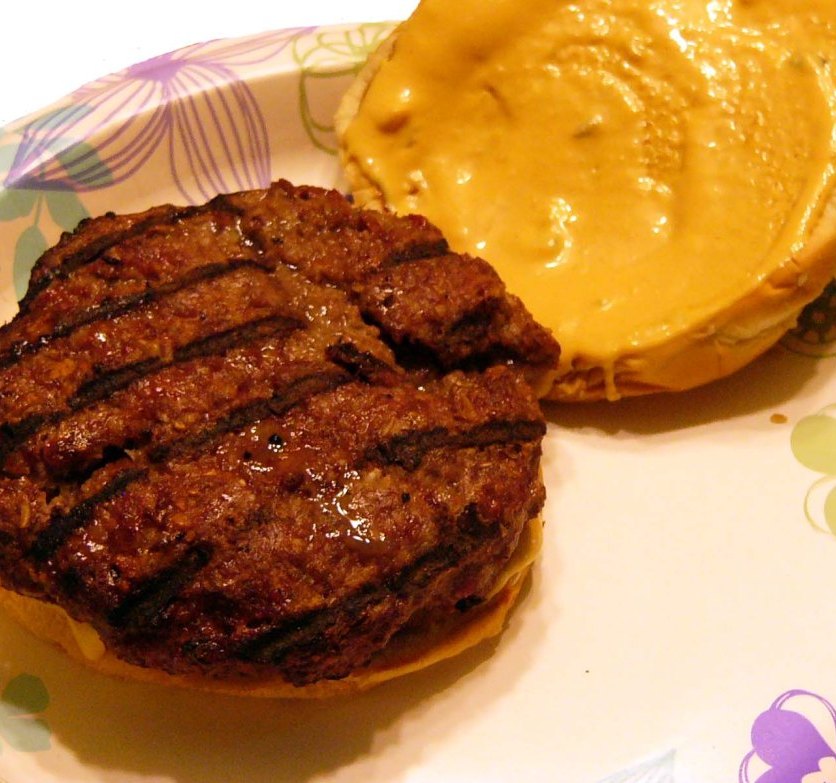 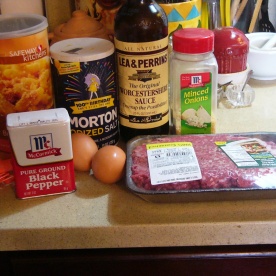 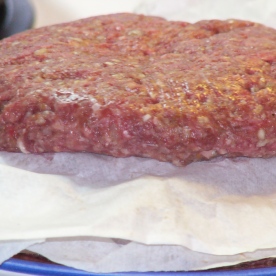 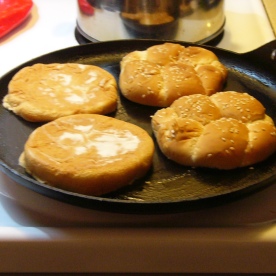 To Make James Rutter Hamburger Spread combine all ingredients in a bowl, whisk to blend well. Cover and chill well until ready to use.