Don’t ask me why, but I’ve been on a real stadium-style hot dog kick lately. Maybe it’s spring fever; or all those extra-long dogs we bought at Costco . . .

Whatever the reason, no matter the season, this easy suppertime combo is always a hit with my guys. While you don’t need to serve your hot dogs with beans, in our house dogs and beans just naturally go together like peas and carrots.

While just about any kind of canned baked bean will do, the Grillin’ Beans from Bush’s Baked Bean collection seem to work best. These beans are packed with flavor to begin with, and stand up well when adding more ingredients to the pot.

As for the dogs, you will want to use a good quality hot dog such as Nathan’s; Hebrew National or Costco’s All Beef Dogs. The cheap dogs will not work well as the skins don’t blister nearly enough and the overall flavor is flat.

Start by making the beans first. That way, your skillet is all primed and ready for the dogs.

Stack the two strips of bacon on top of each other. Cut into three long strips, then  dice into smaller pieces. Set aside until ready to use.

Dice half on an onion (yellow or white, it makes no difference here), and set aside until ready to use.

Heat a cast iron skillet (large enough to later hold the hot dogs) over medium heat. Add the bacon to the skillet. Cook until almost crisp, stirring often with a wooden spoon.

When the bacon is just beginning to brown, add the chopped onions to the pan. Saute onions with the bacon until the onions are soft and the bacon is crisp, about 3 minutes.

With a slotted spoon, remove the bacon-onion mixture and place into a pot. (Leave your drippings in the skillet for the hot dogs).

Empty the can of beans into the same pot. Stir to blend the bacon-onion mixture with the beans. Continue to heat over medium-low heat until hot and bubbling.

Ladle the beans into a small bowl and serve alongside the hot dogs.

For that perfectly crisped dog, add enough water to barely cover the bottom of your cast iron skillet used for the bacon. Be careful, adding water will cause the bacon drippings to sputter.

Immediately place the hot dogs into the steaming pan. Cover and cook on low to medium-low heat until almost all of the water has evaporated.

Uncover, and continue to cook on medium heat until the skins of the hot dogs have begun to blister, rolling and turning dogs as necessary for even crispness. To give your dogs an extra burst of smokey flavor, add just a little more bacon drippings if you have some. If not, a pat of butter will do.

While the dogs cook, cut enough foil to wrap around each bun. Open buns, place in the center of the foil pieces.

Using tongs, plop the steamed pan-fried hot dogs into each bun. Immediately wrap the foil around them. The heat from the dogs will warm the bun.

Serve on individual plates or stack on a platter. Be sure to include your favorite stadium condiments such as raw onions, relish, Ketchup and mustard. 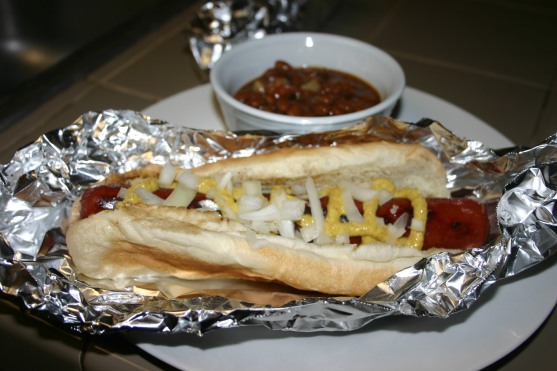 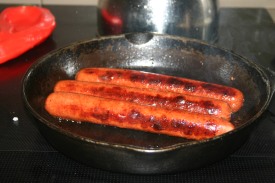 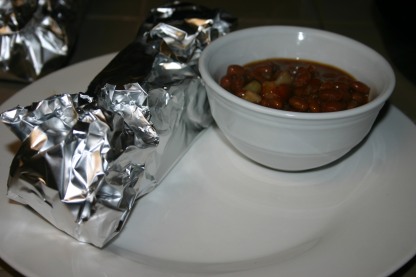