Do you remember when McDonald’s first introduced us to their Big Mac Burgers? Oh my stars – these were not your average “fast food” burgers. Back before convenience of drive-thru windows, you actually had to walk inside a McDonald’s to order your burgers, then wait for them to appear. 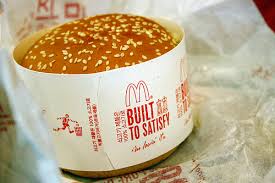 It didn’t take long for your Big Mac to emerge, having gone through an assembly line process of teenage employees. These burgers were so big, they actually had a paper ring around the burger to hold in all the ingredients and keep its shape. (Since the Big Mac no longer requires a paper ring, could it be that the burger has become smaller over the years?) Oh how I remember those burgers!

The sauce was tangy, the burger juicy and the buns were nicely toasted. What truly set the Big Mac apart from other double patty burgers was that added bun in the middle. Smart move – the burger appeared bigger than the competition without necessarily being a bigger burger – as in a thicker patty made with more meat. Yet we were all experiencing a Big Mac Attack. Although we all recognize the name Big Mac, when first introduced it was known locally The Aristocrat, a name not very popular with consumers. Most found it too difficult to pronounce. The name was changed to Blue Ribbon Burger. When McDonald’s was ready to take the burger nation wide, test markets found that the average consumer did not associate Blue Ribbon with McDonald’s. And so it was that a 21-year old secretary working at McDonald’s headquarters in  Oak Brook Illinois named Esther Glickstein Rose created the catchy name Big Mac. The Big Mac first appeared in 1967 in Pennsylvania and sold for a whopping forty-five cents. By 1968, the Big Mac was featured nationwide. In 1974, the Big Mac saw a second wave of popularity in the catchy little jingle “Two all-beef patties, special sauce, lettuce, cheese, pickles, onions – on a sesame seed bun”. By then, the average price had risen to a whopping 75 cents.

Special Sauce, that was the key to a Big Mac – that and the bun in the middle. We all know the Special Sauce isn’t some secret concoction of McDonald’s but rather than a variation on Thousand Island Dressing – a popular spread on the burgers originally sold at another popular Hamburger Chain – Big Boys. The Big Mac was designed to compete head to head with Big Boy Burgers. The Special Sauce is nothing more than store-bought mayonnaise, sweet pickle relish and yellow mustard whisked together with vinegar, garlic powder, onion powder and paprika for that touch of color.

Now you know all there is to know about a Big Mac from McDonald’s. There are a number of copy-cat recipes floating around – most contain the mayonnaise version of the Special Sauce, and some skip the sauce all together, opting instead for the bottled Thousand Island Dressing. Mine is neither. The sauce is tangy and delicious. It can be used on beef burgers, turkey burgers and even chicken burgers. I’ve even used it as a spread on sandwiches. What you do with the sauce is entirely up to you.

This is a towering burger delight is a two-handed sandwich oozing with sauce, cheese and fresh burger goodness.

Combine all ingredients for special sauce in a small bowl. Stir well to blend. Cover and refrigerate for several hours or overnight, stirring occasionally to allow flavors to meld.

Stack about 4-5 leaves of lettuce. Roll tightly to create a “cigar”. Slice the “cigar” to create shredded lettuce. Toss to separate, then set aside until ready to use.

Peel and finely chop onion. Set aside until ready to use.

Divide ground meat into 8 “rounds”. Shape into hamburger patties. Place waxed paper between patties and set aside until ready to cook.

Heat griddle or flat skillet. Place a small amount of butter on griddle, toast buns and wrap in foil to keep warm. (Middle bun needs to be toasted on both sides).

Heat grill for burgers. Grill patties 3-4 minutes per side. Add cheese, let it melt down over the patties OR add cheese to assembly, as desired. Remove patties and cover to keep warm.

Serve with fries and plenty of napkins!