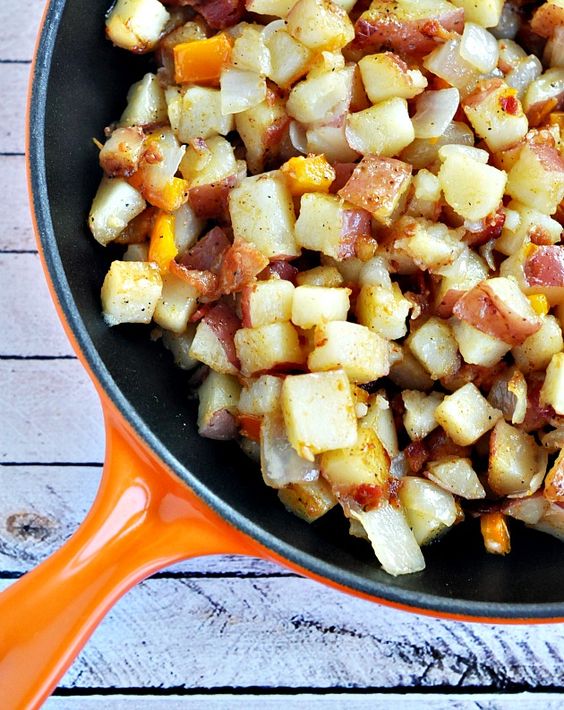 For Mother’s Day a few years back, we decided to do a breakfast brunch. Typically, gatherings are held at my youngest sister’s house. However; that year we were leaning toward a gathering at the family farm.

With a farm setting in mind, I set about the task of creating a country-themed brunch menu. (All recipes I will be sharing in the very near future). Once upon a time, there were cows and chickens and pigs all residing at the farm. These days, there are only goats and sheep. And they aren’t for eating – each one has a name, they are Dad’s pets. One goat in particular, his name is George, becomes very excited when he sees his leach. George sure enjoys his strolls with Dad.

When the sheep were little lambs, they let Hubby pet them, but they ran away from me. Hubby said that was because the lambs knew I wanted to eat them. I called them all by the same name – “Lamb chops”.

Of all the country brunch dishes served that day, the most popular was the skillet potato. While the recipe isn’t necessarily designed for travel, as it turns out it travels very well. I simply wrapped the skillet in a clean kitchen towel for transport, then warmed everything slowly on low-heat until it was time to dish them up. Just before serving, I added the crumbled bacon. Wow, these potatoes are truly delicious! We’ve enjoyed them many times. I especially like to serve these potatoes as a side to Chorizo Scrambled Eggs. Add the potatoes and eggs to a warm tortilla, and you’ve got one fine breakfast burrito in your hands.

Scrub potatoes, dice into bite-size pieces. Place potatoes in a steamer basket, place a pot large enough to submerge the basket. Cover with water, season with salt. Bring potatoes to a boil, cook for 10 minutes.

While the potatoes par-cook, stack bacon, dice and set aside. Peel and dice onion, set aside. Stem, core and dice bell peppers, set aside.

Heat skillet over medium heat. Add bacon drippings to prime the pan. Once the drippings have melted and the skillet is hot, add bacon. When the bacon begins to crisp, reduce heat to medium-low, add onions and bell peppers. Sauté until onions are translucent and bacon is crisp. Remove from heat, remove bacon with onions and peppers with a slotted spoon. Let drain on a paper towel.

Drain potatoes. While the potatoes drain, melt butter in the skillet over medium-high heat. Add potatoes, press into the hot pan. Season with salt and pepper, let brown for 5 minutes. Turn potatoes, scatter bacon mixture and continue to cook another 5 minutes.

Serve directly from the skillet for that real “hobo” feel.

One thought on “Hobo Skillet Potatoes”