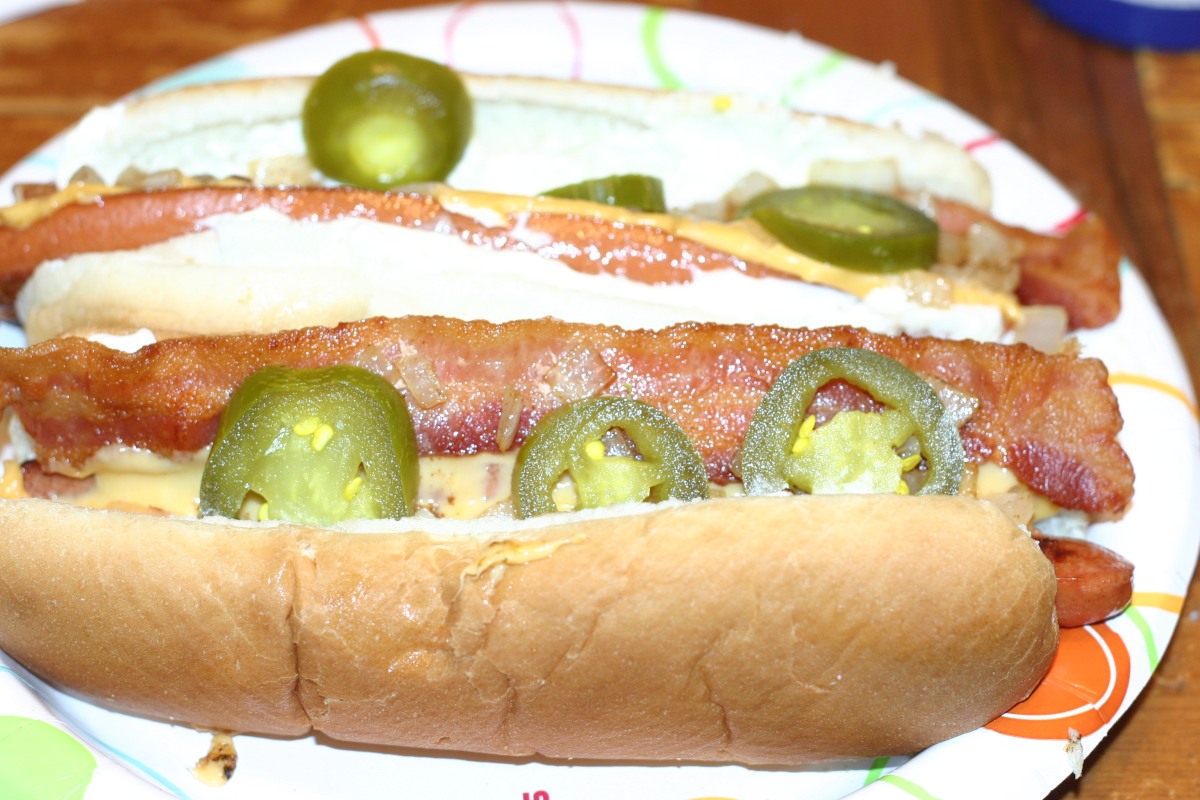 On a wiped-out late afternoon recently, we decided to forego the drive home and cook up what had been planned for dinner, opting instead to pop on over to Five-Guys. If you don’t have a Five-Guys near you, you don’t know what you are missing. If you do, but haven’t given them a try – run, don’t walk, to the nearest Five-Guys.

Five Guys has been a Washington, DC area favorite since 1986. Serving only hand-formed burgers cooked to perfection on a grill along with fresh-cut fries cooked in pure peanut oil, the little burger joint quickly developed a cult-like following. Press paid attention. Customers voted the burger”#1″ in the metro area. 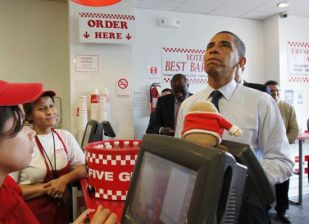 During the 1980’s and 1990’s the Murrell family perfected their simple system. Five Guys was The Place to get a fresh, juicy burger with all the toppings you could stuff between fresh-baked buns. A fifth brother was born and, as their family grew, so did their business. Four more restaurants with sit-down seating were added to accommodate the growing clientele. Now, over 20 years after Five Guys first opened, there are over 1,000 locations nationwide. While Five Guys is a fast food restaurant in theory, nothing is cooked up in advance of your order. And don’t bother looking for the drive-thru window. There aren’t any – the belief behind this (and rightfully so) is that in order to get the most out of your burger experience, you’ve got to enjoy your burger (and dog) fresh from the grill. It’s a rule. No exceptions. Not even if you are the President of the United States.

While Kiddo and Hubby ordered burgers, with an assortment of toppings (Kiddo always included jalapeno and green peppers with his burger, Hubby goes for the onions), I decided I wasn’t in the mood for a burger. Yeah, I know – I’m in the best burger joint in the country, and don’t order a burger. I went for a hot dog instead. “Toppings”? asked the cheerful fellow behind the counter. Oh wow, hadn’t given it much thought – all right then – bacon, cheese, onions and jalapeno peppers. Hands down, this was best hot dog I’ve ever had that wasn’t grilled up at home.

Naturally, I had to duplicate the experience . . . First, the bacon is cooked on a griddle. This gives you nice, crisp bacon for your dog. Next, the dogs themselves are split length-wise and cooked on the griddle, giving the split side a nice, “fried” finish. The onions are chopped. The jalapeno peppers are raw, sliced with seeds intact. Now we all know the heat of a pepper is contained mainly in the seeds and oil of a pepper. While you might not think there would be much heat in a raw jalapeno, surprisingly there is. (Not to mention the pretty, bright green color). Finally, good old processed American Cheese is used to create these awesome dogs. Nothing melts better on grilled meats than American Cheese.

Just one last comment – Five Guys uses regular size dogs. My “twist” on their dog is a super-long dog. Why you ask – why not? After all, we are talking about hot dogs for supper – gotta keep my guys satisfied. And what better way than with a giant dog!

On a flat griddle, cook bacon strips until crisp. Drain on paper towels and set aside until ready to use.

On the same griddle, fry up onions until soft, set aside.

Wipe down griddle with paper towels to “clean”. Split franks, lengthwise. Place cut-side down on griddle over medium-high heat. “Fry” dogs on griddle until nicely browned and cooked through. Press with spatula if necessary to keep dogs flat.

Turn  dogs over, split side up. Place American Cheese on top of dogs and allow cheese to melt.Place bacon strips over cheese. Sprinkle with grilled onions. Lay jalapeno peppers on top (optional). 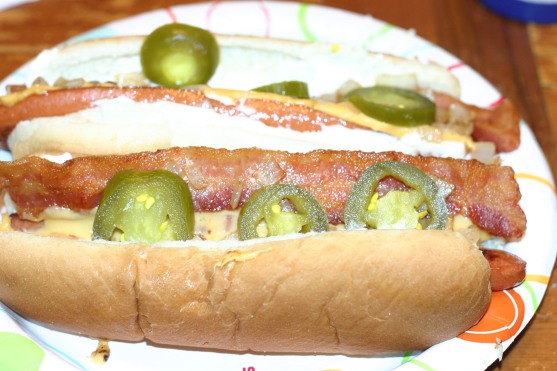 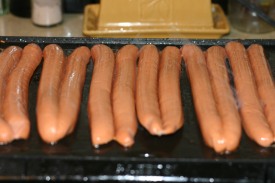 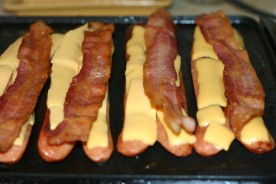 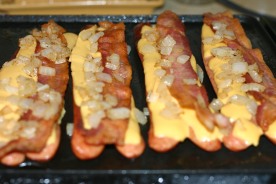 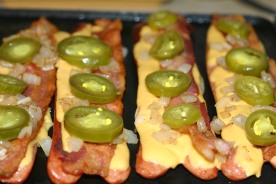 Just like a burger, these awesome Dogs are great with French Fries.