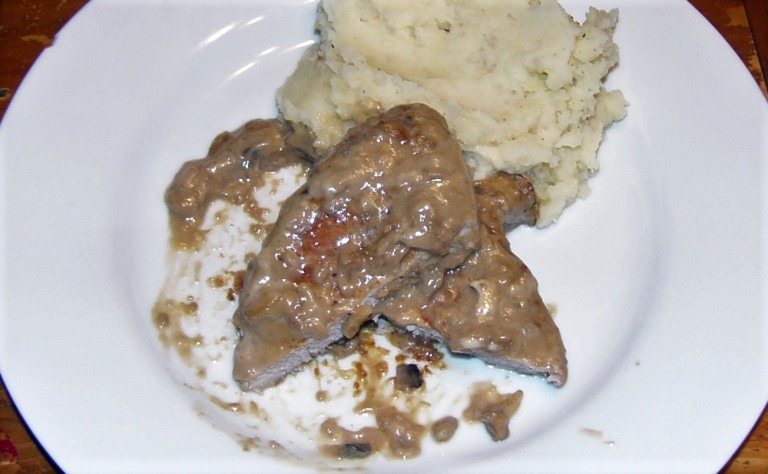 This dish was so basic yet so tasty that I decided to photograph it in all its simple, messy and unadorned glory. All I can say is yum!

Have I mentioned that Hubby is a real meat and potatoes kind of guy? Give him a big plate of meat with a mountain of mashed potatoes and he’s in heaven. It’s not that he doesn’t like vegetables, he will eat them whenever offered. But a simple salad on the side is all the veggie he needs.

This simple supper was so delicious! And oh so easy. I love the flavor surprise the Port wine brings to the sauce. Hubby likes gravy on his mashed potatoes and before I could stop him, he had poured a little of the pan sauce over his potatoes. Surprise! The rich sauce was yummy with the potatoes, although I would use it in moderation.

The potatoes were not your usual mashed potatoes. After the spuds cooked, I drained the pot, then browned a little butter in the cooking pot, added some heavy cream and sour cream, and heated the blend through before returning the potatoes to the pot to smash well with the creamy mixture. The result was a mashed potato that tasted more like a baked potato without the skin.

Yeah, this meal is definitely a keeper in my book. Best of all, the ingredients are probably in your kitchen right now.

Heat a little olive oil in a large skillet over medium heat. Season chops with salt and pepper to taste, brown pork chops about 5-8 minutes per side.

Mix cream of mushroom soup, dry onion soup, milk and port wine together in a bowl.

Pour soup mixture over pork chops; cover and reduce heat to medium-low. Simmer until pork chops about 15-20 minutes. Turn and continue to cook another 10 minutes, until no longer pink and chops are tender.

Transfer to serving platter, pour sauce over chops and serve.

Place cubed potatoes in a large saucepan. Cover with cold water, salt liberally, and bring to a boil over medium heat.

Boil for 10-15 minutes until potatoes are easily pierced with a fork. Drain potatoes well.

To the now empty pot, add butter and heat until lightly browned and sizzling. Remove from heat, add heavy cream and sour cream. Stir to blend. Return to low heat.

Add potatoes. Mash well.  Taste and season with a little salt and pepper if desired.

Cooking Tip: Start by seasoning the pork chops, set aside until ready to cook. Peel potatoes and place in a pot with cold water. Season well with salt and set aside. Heat oil in the skillet. While olive oil is heating, make soup mixture. When you start browning the chops, turn the heat on under the potatoes. By the time the pork is cooked, the potatoes should be ready to drain. Just keep the chops warm in the skillet while you finish the potatoes. Then plate and serve.

Here’s to the true pleasures of life – simple meals and quiet nights spent with those that matter most.