If you have been following along for a little while now, you know that I picked up a Cast Iron Skillet Cookbook while visiting Seaside Oregon. The book is filled with Wayne Family recipes, as in John Wayne. This recipe for Breakfast Potatoes was inspired by a recipe from the Duke’s family collection.

You will notice as you look over the photos I snapped while making an awesome breakfast for my family over Labor Day that the recipe calls for 1 red bell pepper, while the pictures clearly show 2 peppers, one red and one orange. It wasn’t that I was doubling the peppers, but rather making use of a small orange pepper from my garden. A year ago Hubby and I planted a bell pepper plant in our garden. It produced a single bell pepper about the size of a Habanero pepper. Somehow the plant managed to survive the winter, and began growing small bell peppers. It has taken months, but finally a single pepper turned a beautiful orange. Naturally I had to cook with my prize pepper. So one red pepper is plenty, unless you have a little plant in your garden doing its best to give you something special.

Enough chitchat. Let’s get to cooking, shall we?

Scrub potatoes and cut half or quarters depending upon size. Place potatoes to a large mixing bowl with plenty of room to “toss”. Add 1 tablespoon of oil, season with salt and pepper. Toss well to coat all the potatoes with seasoned oil.

Transfer to a microwaveable bowl. Cover with plastic wrap and microwave on HIGH for about 8 to 10 minutes or until potatoes are fork-tender.

Heat 2 tablespoons of oil in a cast-iron skillet over medium heat until the oil starts to shimmer. Add the onions and pepper to the skillet. Cook, stirring often, until tender and just beginning to brown, about 6 or 7 minutes. Using a small grater or planer, grate garlic into the skillet and cook for about 30-seconds, until aromatic.

If the microwave bowl isn’t large enough to toss the peppers and potatoes, place the microwaved potatoes into a larger bowl. Transfer the pepper mixture to the bowl with the potatoes. Toss to mix well.

Heat remaining 2 tablespoons of oil in the now empty skillet over medium heat until just beginning to shimmer. Add the potato mixture, press down gently with a spatula.

Cook potatoes undisturbed for about 6 or 7 minutes, just until browned on the bottom.

Flip the potatoes over in sections and gently flatten again with the spatula. Continue to cook, flipping as needed every 2 or 3 minutes, until well browned. The potatoes should could in the skillet for about 15 to 20 minutes total. Season to taste with more salt and pepper if desired just before serving. 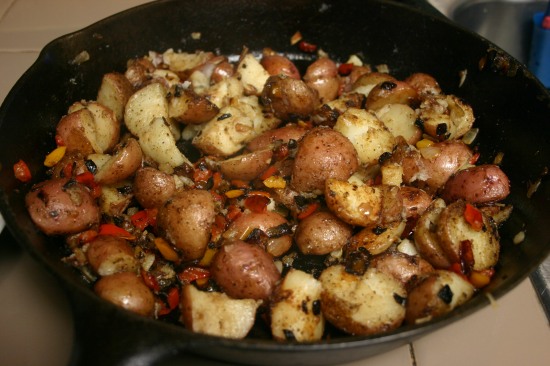 These potatoes are delicious with Country Apple Sausage Patties and Dirty Fried Eggs. 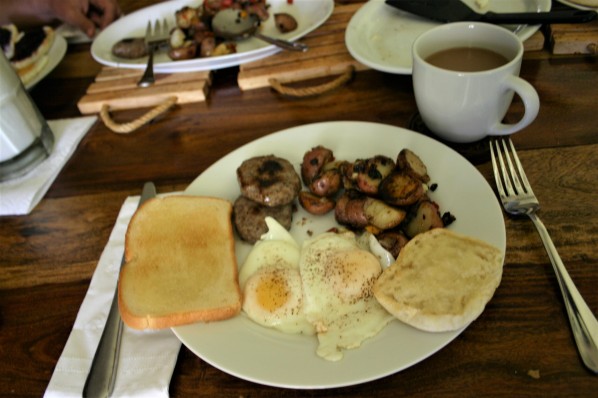 12 thoughts on “Home on the Range Skillet Potatoes”