According to Jewish law, the firstborn male child of any union belonged to God, and the parents needed to “buy him back” on the 40th day of his life by offering a sacrifice in the temple. On this same day, the mother was ritually purified.

Mary and Joseph kept this law, even though the law governing purification did not necessarily apply to them. Catholic teaching tell us that Mary remained a virgin and as a virgin the ritual of purification wasn’t necessary.

Just for further clarification, Catholics also believe that Joseph was older than Mary, a widower with children from his previous marriage. When the Bible refers to siblings of Jesus, these are the brothers and sisters. Since the Jewish community regarded Jesus as the first born of their union, presenting him in the temple was expected. As dutiful Jews, they did just that.

Originally, this feast was fixed on February 14th, forty days after the Epiphany (January 6). Back then, Christmas was not celebrated as the Nativity of Christ. It was the Epiphany that was recognized as his birth, in that it was then his Divinity was revealed. When Christmas became its own feast of the Nativity, the feast of the Presentation was moved to February 2, forty days after Christmas in keeping with the law.

The title Candlemas was inspired by the words of Canticle of Simeon, that the Christ Child was a light to the revelation of the Gentiles. By the 11th century, a custom had developed in the Western Church (Roman Rite) of blessing candles on the Feast of the Presentation. The candles were then lit, and a procession took place through the darkened church. For this reason, the feast became known as Candlemas. While the procession and blessing of the candles is not often performed in the United States today, Candlemas is still an important feast in many European countries.

It’s interesting to note that the Candlemas procession, with its emphasis on light in the last weeks of winter, led to a secular holiday in the United States on the same day. While Candlemas or Presentation of the Lord might not appear on most calendars, Groundhog Day does.

In keeping with the spirit of the day, and the price of buying back the first-born son by offering “a pair of turtledoves or two young pigeons” in the temple, I have created a menu to mark this day. 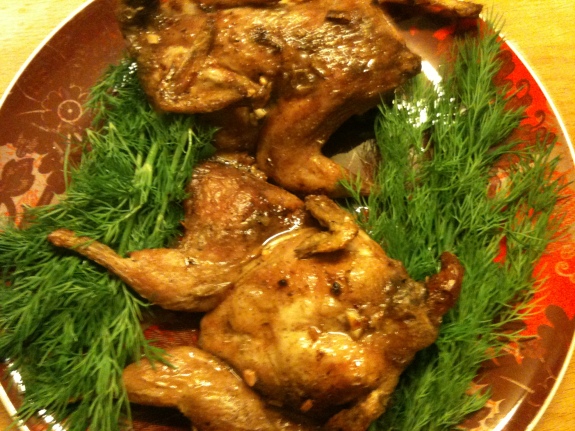 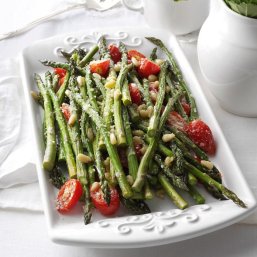 Cut the bacon into large pieces. Cook the bacon over medium heat in a skillet until nearly crisp. Transfer the bacon to a paper towel to drain. When cool, finely chop the bacon into pieces tiny pea-size pieces.

While the bacon fries, finely chop the parsley and set aside.

Whisk together the vinegar, mustard and salt. Whisk in the oils, one tablespoon at a time.

Note: The sauce may emulsify, which is fine.

Once the oil is blended, stir in 1 tablespoon of the parsley and two-thirds of the bacon. Set aside.

While the leeks are cooking, cook the eggs hard-boiled. Place eggs in a small pot with a tight-fitting lid. Add just enough water to cover the eggs. Bring to a boil, remove from heat, cover and let steep for 15-minutes. Plunge in an ice-bath to stop the cooking process. Set hard-cooked eggs aside.

Remove the leeks from the steamer and let drain on a plate lined with paper towels. Cut the leeks in half crosswise, and arrange on a serving platter, alternating them head to tail.

To Spatchcock the birds, turn them breast side down on a cutting board. With a good kitchen scissors, cut through the birds from neck to tail along the backbone. Remove the bone and discard or save for another use such as broth. Then gently open the birds. Turn breast side up, snapping the breast bone to flatten birds out completely.

Heat the oven to 450 degrees. Spray a roasting pan with cooking spray, set aside.

Peel and finely mince the garlic. In a small dish, mix together the olive oil, cumin, coriander and garlic.

Brush the mixture over the birds, working it deep into the skin and underside meat with fingertips, Place the birds, skin side up, in the roasting pan and allow oil mixture to marinate for at lease 20 to 30 minutes.

When the oven is hot, roast the quail for 20 minutes. Season with salt to taste.

Scatter dill and parsley on a serving platter. Place the birds over the herbs and serve.

Melt the butter in a sauce pot over medium high heat. Add the orzo and saute for several minutes, until the orzo starts to become golden brown. Add the broth, cover and simmer for about 20 minutes, or until the orzo has absorbed the broth. Remove from heat, add the basil and Parmesan, and season with salt and pepper to taste. Fluff just before serving.

Trim woody ends from the asparagus, set aside. Cut the tomatoes in half, set aside. In a small bowl, add 2 tablespoons olive oil, salt and pepper. Peel the garlic cloves, press directly over the seasoned oil. Whisk to blend; drizzle over the asparagus and toss to coat.

Place in the heated oven for 15 to 20 minutes or just until asparagus is tender. While the asparagus roasts in the oven; whisk together the remaining 1 tablespoons of olive oil with 1 tablespoon lemon juice.

Remove roasted asparagus from the oven, drizzle with the oil-lemon mixture. Sprinkle with Parmesan Cheese and Lemon Zest. Toss to coat with the cheese, then transfer to a serving platter to serve.

Blend all ingredients together in blender until very well mixed. Place in the refrigerator to rest for 30 minutes.

In a crêpe pan or small sauté or saucier pan, coated with cooking spray and warmed over medium heat, pour a scant amount of batter and tilt pan from side to side to spread evenly.

Cook for 30 seconds and then using a spatula, flip crêpe. Continue cooking for 15-20 more seconds. Repeat until all the batter is used. Stack crêpes with parchment paper or waxed paper between each crêpe.

In a mixing bowl, whip the cream until it is thick, with firm peeks. In a separate bowl, mix the cream cheese, vanilla, and lemon juice until smooth and creamy. Add the powder sugar and salt to the cream cheese mixture, continue mixing until well incorporated.

Gently fold the whipped cream into the cream cheese until combined. Scoop the lemon crème into a piping bag fitted with a large tip. Set aside until ready to use.

Note: Crêpes should be filled just before serving. If not serving immediately, the Lemon Crème can be held in the refrigerator until ready to fill.

When ready to serve, pipe the Lemon Crème down the center of each crêpe, folding the edges over to encase the filling in crêpe.

Arrange a few crêpes on dessert plates, garnish with either whole or dices berries, lemon slices and a few sprigs of mint for another splash of color.