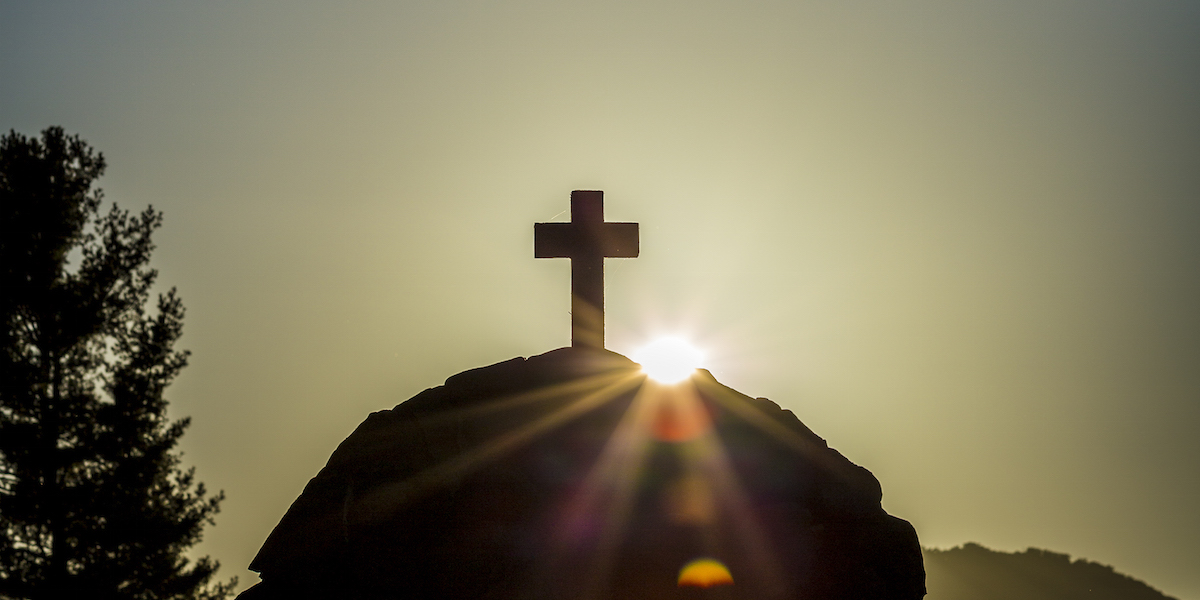 It’s really not a huge leap. Symbolism is laced throughout Christian faith. Such symbolism doesn’t take away from faith but rather enriches it. The Catholic Mass is filled with symbolic gestures. For me, understanding the meanings behind the action does not diminish nor distract but rather brings my deep faith to life.

Decorating eggs for Easter dates back to at least the 13th century. Some believe that eggs, once forbidden during lent (as were butters, creams and a whole host of foods beyond meat) were painted and decorated to mark the end of the Lenten fast. Eating eggs became a part of the Easter celebration.

Easter is such a beautiful time, with parades and pot lucks and giving praise to the hope of tomorrow. But first there is that dark night and we wait. Today Christians know that the Lord is Risen, that God so loves us all. Imagine how Mary Magdalene felt on that first Easter vigil, not knowing. Her sorrow was great. It is with that sadness we approach Holy Saturday.

The Events of Holy Saturday
Jesus’ body rested in the tomb on Holy Saturday; it was a rich man’s tomb, fulfilling the prophecy of Isaiah 53:9 And he made his grave with the wicked, and with the rich in his death; because he had done no violence, neither was any deceit in his mouth.

“The women who had come with Jesus from Galilee followed Joseph and saw the tomb and how His body was laid in it. Then they went home and prepared spices and perfumes. But they rested on the Sabbath in obedience to the commandment.” – Luke 23:55-56

Heat oven to 400-degrees. Line a rimmed baking sheet with parchment paper or foil. Set aside.

Snap woody ends from the asparagus spears and discard. In a medium bowl, toss asparagus with 3/4 teaspoon olive oil and salt. Place in a single layer on prepared baking sheet.

Place in heated oven to roast until asparagus are just tender when pierced with a sharp knife, about 8 minutes. Let cool. Cut spears into 1/4-inch pieces. Set aside.

While asparagus roasts, mince bell pepper and set aside. Chop ham into 1/2-inch pieces. Set aside.

In a medium mixing bowl, combine goat cheese, cream cheese, and cream. Beat at medium speed with an electric mixer until smooth and creamy. Add asparagus, bell pepper, and ham, stirring until incorporated.

Using a serrated knife, cut crusts from all sides of bread. Cut each sandwich into 3 fingers, and then cut each finger in half. Arrange on a platter to serve

Note: To make ahead, build sandwiches without trimming. Cover with damp paper towels, place in an airtight container and refrigerate. Slice just before serving time.

Place eggs in a saucepan, cover with about an inch of cold water. Bring to a boil over medium-high heat. Once fully boiling, remove pan from heat, cover and let steep for 14 minutes.

Remove eggs with a slotted spoon, crack shells on counter and plunge, unpeeled, into a bath of ice water. Let cool 20 minutes.

Peel eggs, running under cold water to rinse away any bits of shell. Chop eggs and place in a large bowl. Add mayonnaise, mustard and season with salt. Egg salad can be prepared a day ahead and held in the refrigerator.

Using a 2-inch round cookie cutter, cut rounds from the bread slices.

On half of the bread circles, place about a tablespoon or so of egg mixture. Top with remaining half of the rounds. Garnish with parsley and skewer into place with cocktail picks. Arrange on a platter to serve.

Place a handful of mini sweet peppers in a cast iron skillet. Place on the stove top over medium-high heat. Roast peppers in skillet until skin begins to blacken and blister. Rotate peppers and continue to roast until peppers are nicely blistered, about 10 minutes total.

While the peppers roast and blister, finely chop the chives and set aside.

When the peppers are ready, remove from skillet and allow to cool for a few minutes. Place peppers, still warm, into a zip-lock bag. Allow the seam in the bag to soften the skins. Remove peppers from bag, cut tops from peppers, and remove seeds. Coarsely chop peppers and set aside.

Toast the bread in a toaster. Once toasted, using a round biscuit cutter, cut 2-inch circles from bread. Lightly butter toast rounds.

Crumble feta over the bread rounds, top with roasted peppers and a sprinkling of chives.

Arrange rounds on a platter.

Brew your favorite pot of tea. Arrange platters with tea pot and enjoy a simple, quiet repast as a family.