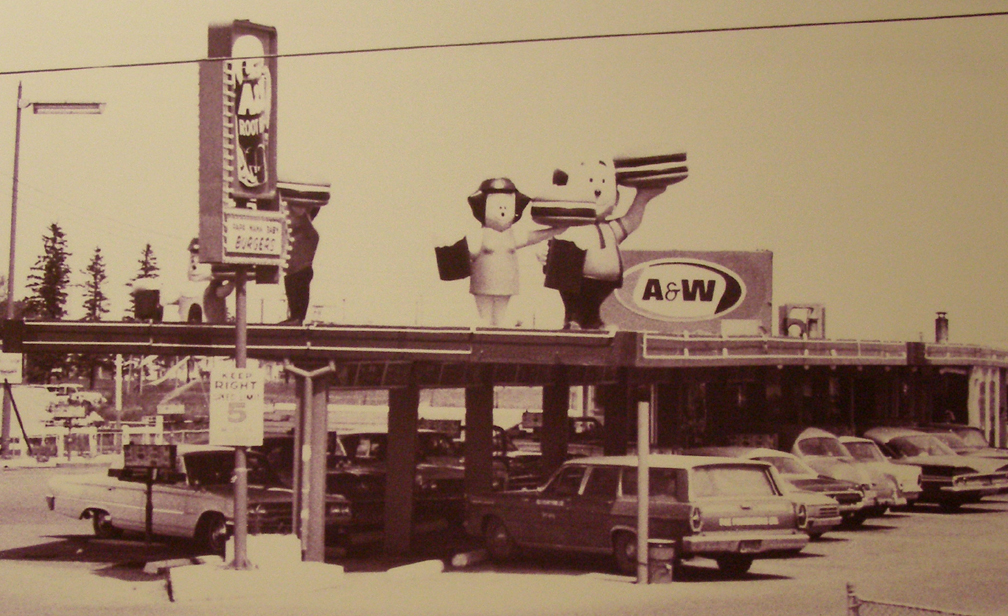 A Papa Burger of course! Growing up, we knew that hands down A&W Root Beer was the best. It was a draft root beer, made on site with just a hint of vanilla. You could stop at an A&W, and they would draw up a gallon right from the tap, pour it into a big glass jug and off you went. I’m not sure why things changed but I do think kids today are deprived of simple pleasures.

A&W Root Beer chains are the first and oldest restaurant franchise in America. It only took Roy W. Allen and his partner Frank Wright two years to figure out that franchises mean restaurants with owners who care a ton about their establishment. They became the first franchised restaurant company in 1921 and sold their frothy root beer drinks for a whopping 5-cents.

In 1999, a Lodi California franchisee named Pete Knight set the record for the World’s Largest Root Beer Float. He did so by flooding a giant vat with 2,562.5 gallons of root beer and plopping in 400 gallons of ice cream.

At the height of the fast food wars, McDonald introduced their Quarter Pounder. A&W hit back with their own massive hamburger patty – a whopping Third-Pound Burger. It flopped. Why? Turns out math isn’t an American strong point. When A&W conducted a focus group to find out what when wrong, they discovered that most people thought 4 is a bigger number than 3, therefore a 1/4-pounder had to be bigger than a 1/3-pound burger. Yeah, funny but not a joke. We are left shaking our heads.

Lightly toast buns on a griddle over medium heat. Set buns aside on paper napkins.

Increase griddle to medium-high and grill burgers about 2 to 3 minutes per side depending upon thickness. Top with cheese, let cheese begin to melt over patties. Pull the burgers and assemble: Place 1 cheeseburger patty on each bottom bun, top with a second cheeseburger patty. Top with tomato, onions, 4 pickle chips and about a quarter cup of shredded lettuce. Smear Thousand Island Dressing liberally on the inside of the top bun. Place bun on top of the shredded lettuce.

Wrap each Papa Burger in the napkin; microwave for 10 seconds to warm the bun. Serve immediately.

And now for the star attraction – the reason for the season – or at least the day. I give you an honestly simple A&W Root Beer Float. (For the real deal you’d need to make your own soft-serve ice cream, but that’s okay – these floats are just as delicious).

Slowly pour 6 ounces of root beer into 4 well-chilled mugs or glasses. Carefully add 3 scoops of Ice Ceram into each mug.

Pour as much of the remaining root beer as possible over the ice cream, tipping the glass to help prevent frothing. Top each glass with some whipped cream and a cherry.

4 thoughts on “What Goes Better with A Root Beer Float?”