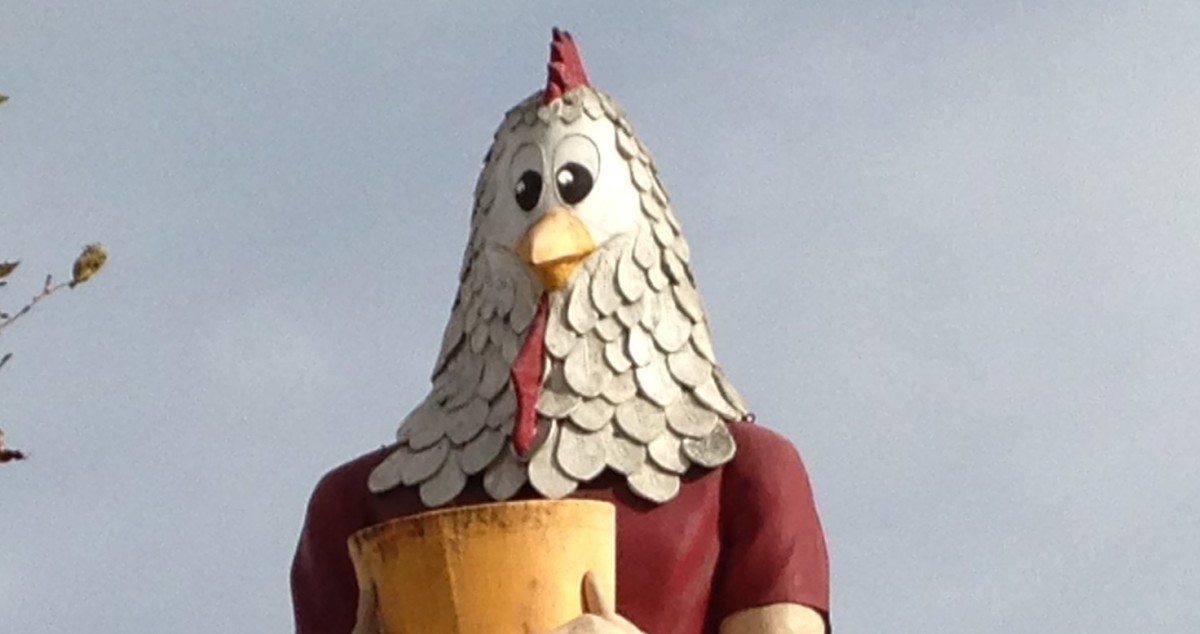 September 1 – really? Where did the time go? Crazy fast year. Thus far, 2021 has proven to be more of a rollercoaster ride than 2020. You’re open, you’re closed. Wear a mask until you get the vaccine. Vaccinated? Doesn’t matter, put the mask on again. Wear it inside, wear it out side. Sleep in the damn thing till we can figure it out.

So what does all this have to do with National Chicken Boy Day? Nothing, I just needed to rant. Now that I’ve got the nonsense out of my system (for the moment) let’s talk Chicken Boy. With the exception of a 10-year stretch a while back, I have lived my entire life in Northern California. Southern California was a place for vacations – Disneyland, Sea World, Hollywood and all that. Yet until I began this adventure of blogging, I never knew that Chicken Boy existed. Did you?

Chicken Boy was once billed the Statue of Liberty by his promoters. He was the creation of The International Fiberglass Company out of Venice, California. They gave us the likes of Paul Bunyan and The Muffler Man. If you ask me, Paul Bunyan shaved his beard and took the job as The Muffler Man. Chicken Boy is actually Paul Bunyan. Paul’s head was replaced with a giant chicken head, the arms repositioned and the ax became a bucket of chicken.

Chicken Boy beckoned travelers along Route 66 in LA (the end of the line so to speak) to come on in for a bucket of fried chicken. We aren’t going to get into the whole twisted idea of a giant chicken-man-boy getting people to eat chickens. Think about it a moment – that’s just weird.

Now in my defense for never actually seeing Chicken Boy in person, he was pulled from his original perch in 1984 and sat in storage until 2007 when he reappeared high above Figueroa Street, at his new home. Now I know we should be eating fried chicken in honor of Chicken Boy’s original calling. But hey, chicken is chicken, right? Besides, roast chicken is more popular with home cooks than fried chicken. At least that’s true with this home cook. And game hens are just shrunken chickens, so it’s all good.

So here’s to the first of September and National Chicken Boy Day!

Scrub potatoes, quarter and place in a medium size bowl. Peel onion, cut into wedges, add to the bowl of potatoes. Drizzle vegetables with 2 tablespoons oil, the thyme, salt and pepper. Toss until mixed well, set aside.

Place chicken, breast side down, on cutting board. Using heavy-duty kitchen scissors or poultry shears, cut closely along one side of backbone from thigh end to neck. Repeat on other side. Remove backbone, and discard. Turn chicken over so breast side is up; press down to flatten breast area by pressing firmly with heel of hand. Rub chicken with remaining 1 tablespoon of the oil.

Heat 12-inch cast-iron skillet over medium-high heat until hot; place chicken breast side down. Season side facing up with 1 tablespoon chicken seasoning; top with 10-inch heavy skillet to weigh down. Cook 6 minutes or until skin is golden brown. Remove smaller skillet, and transfer chicken to plate.

Arrange vegetable mixture in single layer in the 12-inch cast-iron skillet. Place chicken, breast side up, on vegetables, and sprinkle top with remaining 1 tablespoon chicken seasoning.

Roast; uncovered in the heated oven for 45 minutes or until juice of chicken is clear when thickest pieces are cut to bone and vegetables are tender and lightly browned.

For a rustic presentation, serve directly from the skillet. Don’t worry about carving the birds, the meat is so tender, it pulls apart with a fork.