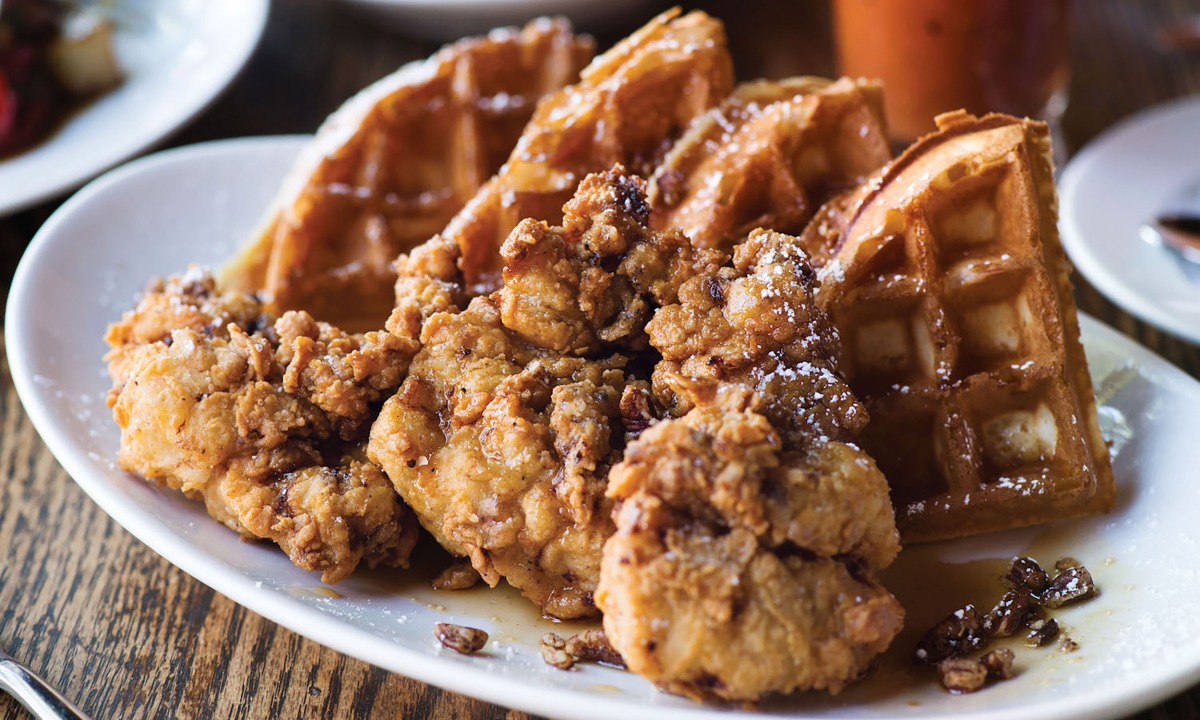 Today is National Chicken and Waffles Day. When it comes to Chicken and Waffles, most of those “in the know” have heard that we can thank Harlem’s bleary-eyed jazz musicians for this combination. As the story goes, these entertainers often frequented the after-hours clubs of Harlem. It was too late for dinner, but there was left-over fried chicken available. It was also too early for breakfast, yet the cooks had already begun to whip up waffle batter. The two just naturally found their way together.

It’s a great story, of that there is no doubt. Fact is, Chicken and Waffles were popular in Harlem in the 1920s, and eventually made their way to the Los Angeles Soul Food scene shortly thereafter. But that’s not the whole story. Chicken and Waffles actually began long before there ever was a Harlem Jazz Scene. Try Germany, in the 1700s. In Germany, it was common to serve meats with something to soak up the juices. So when the German immigrants came to America, the Pennsylvania Dutch brought the practice with them. The early rendition was made with fried catfish, much more readily available. Chicken was a luxury. However; by the 1840s, broiled chicken with waffles began to make an appearance in a tavern in Springfield, Massachusetts. The Tavern was owned by Uncle Jeremy Warriner and his wife, Aunt Phoeby, two well-known abolitionists. The cooks at the Taverns were African-American women, either freed or runaway slaves, who learned their trade as cooks in the plantation house kitchens. Prior to the Civil War, chicken and waffles were extravagant, a signature of the South with well-trained African-American cooks.

Then in 1909, the waffle iron was readily available for the home cook, with the promise “You can attend a chicken and waffle supper right at home any time you have the notion if you are the owner of a Griswold’s American Waffle Iron.”

Marinate the chicken: Combine the buttermilk, onion powder, pepper, salt, and cayenne in a large glass mixing bowl or zip-lock bag. Add the chicken and submerge to coat completely. Cover and refrigerate for 12 hours or overnight.

Heat the oven to 250-degrees. In a medium saucepan, warm 1/4 cup of milk with the 1/4 teaspoon sugar over low heat for 2 minutes. Remove from the heat, add the yeast, and let bloom until foaming, about 15 minutes.

Once yeast mixture has bloomed, add the remaining 1/3 cup sugar, the melted butter, and egg yolks. Whisk to combine. Whisk in the flour, alternating with the remaining 2-1/2 cups of milk, until smooth. Set aside.

In a stand mixer fitted with the whisk attachment, whip the egg whites until stiff peaks form, about 3 minutes on high speed. Gently fold whites into the waffle batter.

Grease a waffle iron with butter. Fill wells of waffle iron with about 1/2 cup batter, cook according to the manufacturer’s instructions. Transfer waffles to warm sheet pan and hold in the oven. Continue until all the waffles have been made. Keep warm until ready to serve.

Fill a cast-iron skillet with about 2 inches of oil. Heat to 350-degrees.

Working in batches, fry the chicken until golden brown and cooked through (165-degrees on thermometer when inserted into the thickest part), turning once, about 8 minutes. Transfer fried chicken to a plate and keep warm in the oven. Let oil return to temperature between batches.

To serve, arrange chicken with waffles on individual plates. Drizzle with syrup, serve and enjoy.

6 thoughts on “The Perfect Midnight Meal”