I gotta tell you, when I was originally putting this together, it was going to be all about the Pork Chops. But then I realized this is a lovely Sunday Supper and all I needed to make it complete was to share a few more recipes. How perfect!

END_OF_DOCUMENT_TOKEN_TO_BE_REPLACED 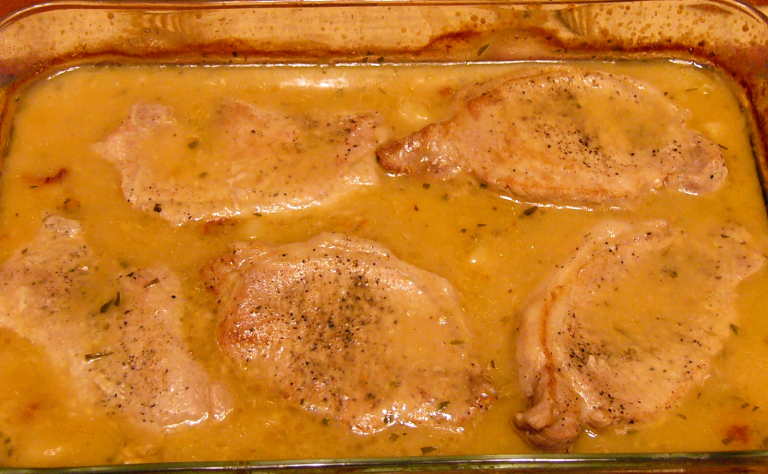 Recently, I whipped up this family favorite, with a few new twists. That’s the beauty of recipes – always evolving. First off, I used pork chops that were about 3/4 of an inch thick rather than my usual thin cut chops. As I was seasoning my chops for the skillet, it dawned on me to use a little bacon drippings rather than oil to prep the pan. Bacon drippings would help to crisp up the thin ribbon of fat on one side of my chops while adding a nice, smokey flavor. Sure enough, the chops browned up beautifully in the bacon grease. While the chops browned, I mixed up my potato soup, ready to smother those chops in the flavorful soup mixture. When the chops were pulled from the skillet, I noticed a nice rendering of pan drippings left behind. Hum, seemed a shame to let those beautiful drippings go to waste. I poured my potato soup mixture into the pan, scraping up all those wonderful bits of brown goodness. Wow, what an awesome difference! The chops were seared on the outside, moist and tender on the inside. The sauce was infused with a wonderful, smokey flavor.

This recipe has been in my collection for years – ever since I first created it one evening when I went to the cupboard with one recipe in mind only to discover that I had the wrong can of soup in my cupboard. It was my plan to bake pork chops in a sauce made from Cream of Mushroom Soup. Somehow, I had Cream of Potato Soup in the cupboard. Most unusual. The fact that I had Cream of Potato Soup in my pantry at all told me I had grabbed the wrong soup at the market. I was tired, it had been a long day, and I simply did not feel up to running to the market for a can of soup. I decided to make the best of things, and use the Cream of Potato Soup instead. That first creation of Potato Pork Chops was made with a can of water, a little seasoning and no tarragon. It was good, but a bit bland. Over the years this pork chops recipe has evolved into a much more flavorful dish.

In the winter of 2011, my brother came to stay with us for a while. Hands down, he is one of fussiest eaters on the planet. Now I love my brother, and I love my mother (God rest her soul) but he is a monster she create. My brother was the only boy in the family – and he became king of the hill – with one set of rules for us girls, and another set of rules for him.  While my sisters and I had to eat whatever was placed before us or go without, our brother was allowed to eat whatever made him happy.  While we ate fish sticks on Fridays, he ate chocolate cake! As a result, his culinary palate is limited to foods generally eaten by teenagers – hamburgers, hot dogs, and pizza – not the gourmet kind, but with a red sauce and plenty of pepperoni, thank you. While I prepare wonderful meals on the weekends for the family breakfast, my charming brother dines on popcorn and turkey sandwiches – bread and meat – nothing else, not even mayonnaise.

One evening my brother wandered into the kitchen to inquire what I had planned for dinner. (Depending upon his finances and my answer, he would then decide if dinner meant a trip to McDonald’s).  When I said Potato Pork Chops, he made his “I’m not going to like this” face and said pork chops are fried, barbecued or fixed “Filipino” style (adobo). It took some convincing, but he decided to give it a try. This dish, like my Parmesan Pork Chops, was a hit with the King. If you have fussy eaters in your house, this is one dish that is sure to please. My brother is coming along, trying new things in his old age and he’s discovering a completely new world – one with flavor.

Season chops with salt, pepper and onion powder on both sides. Rub gently to get more of the seasoning into the chop.

Over medium heat, brown chops in enough bacon drippings to lightly coat bottom of large skillet. Cook chops 3 minutes per side or until lightly browned.

Place pork chops in a large casserole dish. Mix Cream of Potato Soup, chicken broth and tarragon together in a large bowl. Add the soup mixture to the now empty skillet to bring all those lovely browned bits into the sauce. Pour over pork chops. Cover tightly with foil and bake in a preheated 400-degree oven for about 45 minutes to 1 hour. Turn chops over about half way through the cooking time to allow both sides to be saturated in sauce.

Note: When using fresh ground pepper, I like to grind the pepper into the palm of my hand, then “sprinkle” over the pork. About two turns of the mill per side is usually enough pepper.

Do you shop at one of those big box stores? Recently, Hubby and I made our monthly Costco run. Buying in bulk, when done right, saves money, and all you need to do is set aside a little time to break down the giant packages into more reasonable portions. Take those giant packages of pork chops for example. Forty thin-cut pork chops works out to fifty-cents per chop. For us, forty pork chops equates to the meat needed for six meals. These are easy to break down into smaller portions, and stored in the freezer. Buy a roast that can feed an army, cut it into smaller roasts, and you can easily transform one giant roast into three or four two-pound roasts. One package of stew meat becomes two stews, with plenty of left overs for lunches during the week. For our little family of three, breaking down those big box store containers into manageable servings works well while stretching our buying power.

This one-skillet supper is super easy to whip up, takes little time to cook and is perfect for a mid-week dinner. Don’t have thin-cut pork chops? That’s okay, just increase your simmering time to about 20 minutes, depending upon thickness.

Peel onion, cut in half and then slice half of the onion into long, thin slivers. Set aside.

Heat large skillet over medium high heat. Add one teaspoon of oil to hot skillet and give the pan a good swirl to coat the bottom of the pan.

Sear pork chops in hot oil for 2 minutes per side. (You may have to do this in two batches depending on the size of your skillet to avoid over crowding).

Remove chops from skillet, place on  a sheet of foil and seal to keep the chops warm.

Add remaining teaspoon of olive oil to same skillet, swirling to distribute. Add sliced mushrooms and onions to the pan. Sauté until lightly brown and the mushrooms have begun to release their juices, about 5 minutes.

Sprinkle mushroom mixture with flour and cook, stirring constantly, for one or two minutes or until all flour has been absorbed.

Add both chicken and beef stock. Stir and scrape the bottom of the pan to gather all the brown bits. Reduce heat to medium-low and let the mixture simmer for about 5 minutes. The gravy will begin to thicken.

Add the chops back into the pan (along with any drippings), spooning the gravy over the chops. Continue to simmer, uncovered for 10 minutes longer or until pork chops are heated through, allowing the gravy to reduce by half and thickened. If necessary, cover and cook for an additional 5 to 10 minutes or until pork chops are tender. Taste the gravy, add more salt and pepper to taste.

Transfer chops to a large rimmed serving platter or casserole dish. Pour all the gravy over chops and serve.

The gravy is delicious and can be served over mashed potatoes. The mushrooms and onion slivers add both texture and flavor to the pan gravy.