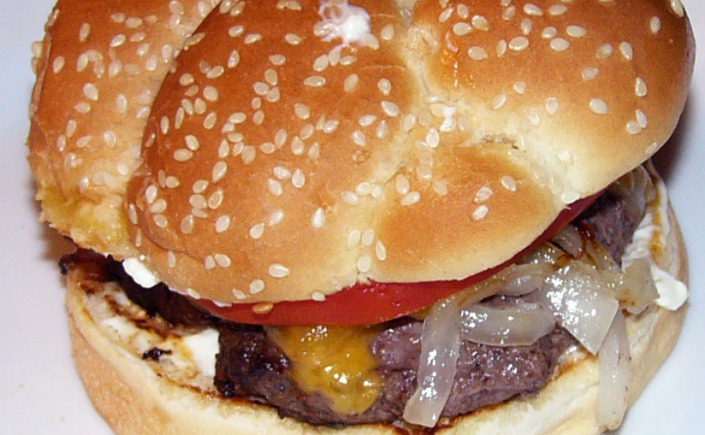 Onions and burgers go hand in hand. Take Patty Melts with Grilled Onions on Sourdough, the onions are caramelized, and placed on top of a rectangular patty between two slices of grilled bread – a diner staple. At backyard barbecues, plates of lettuce, tomatoes and sliced onions are offered up to accompany all those juicy burgers fresh off the grill. Onions are worked into the raw meat for added flavor before the patties are grilled. No double about it – onions and burgers are a marriage made in heaven. Yum – perfect for a Saturday Burger Night. 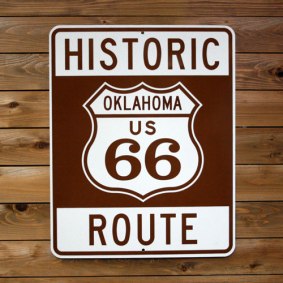 Way back in November of 1926, a major pathway for those migrating west from Illinois to California was U.S. Route 66, also known as the Will Rogers Highway, the Main Street of America or the Mother Road. Route 66 was one of the original highways within the Continental United States. It stretched from Chicago, Illinois through Missouri, Kansas, Oklahoma, Texas, New Mexico and Arizona before ending in Santa Monica, California. Route 66 took travelers a total of 2,448 miles. Diners sprung up all along the route to feed all those hungry motorists. In the beginning, people doing business along the route became prosperous. Oh but hard times and the Dust Bowl lay ahead.

Back during the depression, meat of any kind was expensive – even the ground scraps of meat for hamburgers commanded a hefty price. A man named Ross Davis owned a hamburger joint aptly named “The Hamburger Inn”. His place was along route 66 in El Reno, Oklahoma. Mr. Davis needed to cut overhead without necessarily cutting the size of his burgers. He decided if he “smashed” a handful of onion slivers into the ground beef, the amount of meat per burger used could be reduced while the burger’s size appeared unchanged. So it was that the Oklahoma Onion Burger was born.

Today we can create these wonderful burgers without skimping on the meat. I use about a pound and a half of lean ground beef to create four decent sized patties. Most of the recipes for Oklahoma Onion Burgers have you place the patties on the griddle, top with onions and press down on the onions with the back of a spatula to infuse the onions to the burgers.  You can do it that way.  But be warned, you must work quickly since you don’t want to press on the burgers once the juices begin to move about inside the meat or you’ll end up with dry burgers.  I pile the onions on a rimmed baking sheet, form the patties over the onions, then press down to seal the meat with the onions before the burgers ever hit the grill.  The burgers are then cooked onion side down first to allow the onions to caramelize into the meat before flipping over to grill the other side. One thing’s for sure – pass plenty of napkins because these are some of the juiciest burgers around. And the onion flavor is out of this world.

Peel onion and cut in half to create two “domes”. Lay onion, cut side down, and cut all the way around to create thin slivers. Repeat with second half of onion. Combine onion and 1 teaspoon salt in a bowl and toss to combine, transfer to a colander and let sit for 30 minutes, tossing occasionally. Cut several layers of cheesecloth, large enough to hold onions in a bundle. Using tongs, transfer onion to cheesecloth, gather edges and squeeze onion dry.

Divide onion mixture into 4 separate mounds on a rimmed baking sheet. Form beef into 4 lightly packed balls and season with seasonings as desired. Place beef balls on top of onion mounds and flatten beef firmly so that the onion adheres and patties measure 4 inches in diameter.

Melt bacon drippings on a griddle over medium heat. Using spatula, transfer patties to griddle, onion side down, and cook until onion is deep golden brown and beginning to crisp around the edges, 8-10 minutes. Flip burgers, increase their heat to medium-high and cook until well browned on the 2nd side, about 2 minutes. Place 1 slice of cheese over each burger, allow to melt.

Spread favorite condiments on buns such as mayonnaise, ketchup and/or mustard. Place a lettuce leaf on the bottom of each bun. Top with onion burger and a slice of tomato. Place top bun into place. If desired, cut burgers in half to make it easier to handle when eating. Serve with plenty of napkins.