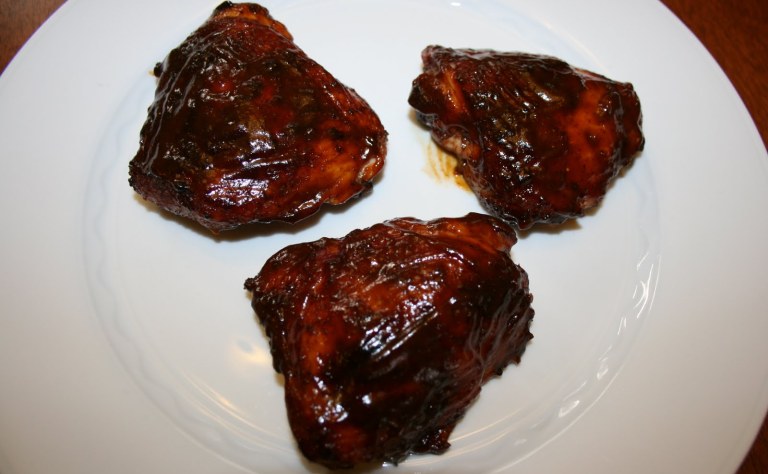 So often, we post only our successes – beautiful pictures of perfectly cooked foods. But let’s face it, we’ve all experienced our bombs – mistakes in the kitchen that render food hardly worthy of eating much less blogging about. I think it would be good to see those flops every now and then, as a reminder that everyone makes mistakes. It’s a humbling admission. Yeah, you should have seen my 7-layer Leaning Tower of Cake with a cherry on top!

This little crock pot disaster happened a few years ago. I actually snapped a picture of the beyond barbecued chicken as a reminded that none of us are perfect and flops help to keep us humble.

The minute we walked in the door that night, I knew I had a disaster on my hands. For one thing, we were late getting home. Actually, we were late getting to work, so we needed to make up for the time. Our car decided it wasn’t going to start – the alternator finally decided to give up the ghost – and in the process drained the battery. Thankfully, our neighbor gave us a jump. Hubby managed to keep the car running long enough to drive out to the farm, borrow Dad’s truck for transportation, and leave our car with our trusted mechanic in town. We had suspected a failing alternator for a while, but the problem had been an intermediate one, so our mechanic was hesitant about simply replacing the alternator until he was sure that would solve the issue. On this morning, we were all sure.

It was one of those days. Before leaving for work (or at least attempting to leave) I had started dinner in the crock pot – Baby Ray’s Slow Cooker Barbecued Chicken. From what I could tell, it would have been great. Even coming home late would not have been enough to ruined a crock pot dinner. However; I made one HUGE mistake. When Kiddo put the crock pot away, he had turned the knob one click to the right, which meant the pot was put away set for “low”.

When I put everything into the pot to cook, I clicked the knob one to the right without looking to see what the setting was, assuming it was “off’ and one click would put it to low. Wrong! My click put the pot on High. That would have been a fine setting for about 4 or 5 hours. But 12 hours later – the chicken was so dry, the barbecue sauce wasn’t enough to keep it moist.

My guys ate it anyway, as best as they could with twisted smiles on their faces. Gotta love ’em!