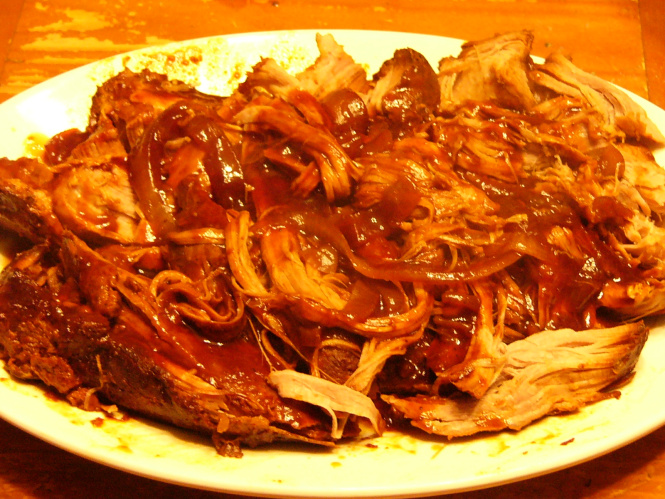 In flipping through the recipes I’ve collected over the years since “discovering” the vastness of the internet, I’ve noticed that a growing number of Barbecue-Sauce based recipes call for Sweet Baby Ray’s. Even Burger King featured Sweet Baby Ray’s in their “Angry Whopper” concoction. Curiosity got the better of me – what’s the story behind this popular Barbecue Sauce? It’s gotta be southern, right? An old, a well-guarded secret recipe handed down from generation to generation.

As it turns out, the recipe is a “family” recipe. Just how old the original recipe is, Chef Larry Raymond isn’t saying. Back in 1985 he entered his family recipe in a rib cook-off in Chicago. And not just any rib cook-off, it was the Mike Royko Rib-off, one of the largest in the country. Chef Larry named his sauce Sweet Baby Ray’s, after his younger brother, Dave, who earned the name on the basketball court. Sweet Baby Ray’s took second place, which is a huge accomplishment from a then unheard of entry. It is now America’s leading bottled barbecue sauce. All I know is that when a recipe calls for Sweet Baby Ray’s, I don’t mess around with it. Sweet Baby Ray’s it is all the way. Now I might play around with the other ingredients, but not the barbecue sauce.

This dish is great in the summer when fresh corn is at the peak of it’s season. There’s something about barbecue and cob corn that just naturally go hand-in-hand. (And sorry folks, but when it comes to corn on the cob, fresh-picked has no substitute. I grew up with corn growing out back – it doesn’t get any fresher or better than that.) I feel the same way about Country Fried Potatoes when it comes to barbecue sides. So much so that I realized I needed to share my recipe for Country Style Southern Fried Taters before I dare share this recipe with you. Otherwise, you’d miss out on the best ever side for pulled pork. Yep, I feel that strongly about my skillet fried potatoes. And while I felt the need to “share” – unfortunately we won’t be having fried potatoes tonight. I’ve got a bit of a bug, so crock pot cooking and some canned sides are just what the doctor ordered.

In the south, Barbecue is more than just a style of slow-cooking meats over a fire pit, it’s a social gathering. Southerners don’t go someplace (be it a neighboring farm) for a barbecue dinner, they gather at the barbecue. It’s an event. And just because the weather is gloomy doesn’t mean we still can’t enjoy slow-cooked meats with all the trimmings. Which is why a good, smokey barbecue sauce is so important to the flavor of a crock-pot barbecue.

Our house is a Pepsi-Produce household. No offense to Coke, but we prefer Pepsi. When dining out, if Pepsi is not on the menu, Hubby has a Root Beer and I order an iced tea. Kiddo doesn’t have a preference, soda is soda to him. When I read this recipe for Pulled-Pork that called for Coke, I knew we would need to break down and bring a single glass bottle of the stuff into the house. Let’s face it, Coke and Pepsi are NOT even close in flavors. Both bubble from carbonation, both have that deep brown color, but that’s where the similarities end. Pepsi is sweeter than Coke, and when it comes to cooking, the flavors of the ingredients are key to bringing it all together. So coke it was. The only change I’ve made from the original recipe from The Frugal Girl (http://thefrugalgirls.com/2014/06/crockpot-bbq-coca-cola-pulled-pork.html) was to increase the onion. Her recipe called for 1/2 a white onion, optional. I’ve increased it to an entire onion, no option about it.

Peel and slice onions into semi-thick round, enough to cover the bottom of your slow cooker. Place onions in a single layer on the bottom pot and place pork tenderloin on top of the onions. 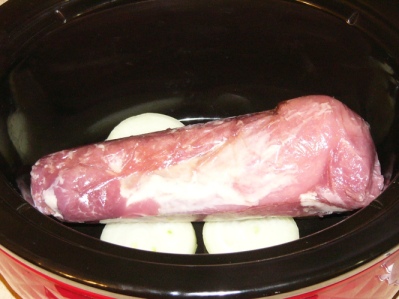 Pour the can of Coke into a mixing bowl. Add barbecue sauce to the bowl with the Coke and stir gently to mix well. (You will definitely want the Coke in the bowl FIRST, otherwise the Coke will fizz up and make a mess).

Pour mixture over and around the pork. Cover pot and set on LOW for about 8 to 10 hours. (The longer “cooking” time is for straight from the freezer pork tenderloin, which is great because you don’t have to remember to thaw the meat out the day before. You can cook it up whenever you feel the need for awesome pulled pork without having to plan ahead).

Remove pork from pot and place on a warmed serving platter. Remove onions from the pot, place on top. Shred pork and onions together, moistening meat with a little of the sauce from the pot as you pull. 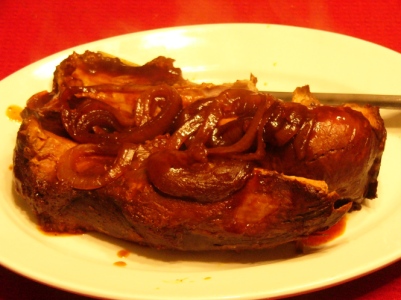 Drizzle with more sauce and toss to blend. To serve, pile the pulled pork onto your plate, or sandwich it nicely on a toasted hamburger bun. We like to eat it “as is” the first time around, then take the leftovers to work for a second meal of awesome pulled pork sandwiches later in the week.

Tips and other thoughts: This down-home Texas goodness goes well with buttery corn (on the cob in the summer is best, but canned is will do in the dead of winter). When I can’t get fresh corn, I’ll buy the vacuum packed canned corn, rinse the heck out of it, then warm the corn slowly in a sauce pan with plenty of butter. Never, ever boil canned corn – it’s already been cooked once, there’s no need to cook the life out of it a second time. Just warm the corn – and the buttery goodness is almost as good as slathering a fresh-cooked ear of corn just to watch the butter melt into all the little corn rows.