Today is the fifth day of the Lenten Season. Saint Patrick’s Day is less than a week away – that magical day when everyone suddenly becomes just a wee-bit Irish. Throughout the country, there will be parades as our rivers run green. It is a party in the streets. While the rest of America may be eating Corned Beef and Cabbage and raising a pint or three of Guinness, we will be dining on a less than traditional Irish-American fare.

In Ireland Saint Patrick’s Day is more akin to America’s day of Thanksgiving. It is a day for families to gather, to attend Mass and to honor the Patron Saint of Ireland. Although Saint Patrick is credited with the conversion of Ireland to Christianity, Saint Patrick wasn’t Irish. His exact birthplace and date are unknown, although it is believed that he was born in Wales, of Roman parents. At 16; he was captured by Irish raiders and spent 6 years in Ireland as a prisoner. During that time, he learned the language and became a follower of the teachings of Christ. Later; Saint Patrick traveled to France, where he formally converted to Christianity. He spent 15 years studying the faith. As the story goes, Saint Patrick had a vision that God’s plan for him was to return to Ireland to convert his captives to Christianity, turning away from other faiths. Although legend tells us that Saint Patrick drove the snakes from Ireland; in reality there were no snakes on the Emerald Isle to begin with. Many believe that the snakes are actually symbolic of pagan beliefs and that the imaginary of Saint Patrick ridding the island of snakes reflects this conversion. Whatever your beliefs may be, for many of us there is a magic and sense of merriment surrounding Saint Patrick’s Day.

Dad has Irish roots. Yet we did not observe Saint Patrick’s Day with food, spirit or merriment. I’m not sure why that is – perhaps because Dad grew up as an Irish American Protestant, converting to Catholicism as a young man. Although Mom was a cradle-Catholic; as you can imagine Saint Patrick’s Feast Day wasn’t a big deal in the Philippines. I feel strongly about my Irish Catholic identity, the reality is that I do not come from a long line of Irish Catholics but rather am a first generation Irish Catholic.

While Dad likes his corned beef and cabbage today, it simply was not something we ate growing up. And the truth of the matter is, I still don’t particularity care for the taste of corned beef and cabbage. In my desire to honor what I believed to be Irish-Catholic traditions; I created a menu for my family that included corned beef while omitting the cabbage (see Saint Patrick’s Day Supper for detail). We served it up for years – until it occurred to me – if Corned Beef isn’t the National Dish of Ireland for Saint Patrick’s Day, why the heck am I eating it year after year? Silly me. Why not serve up something else that I liked? 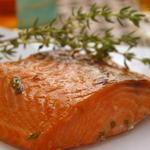 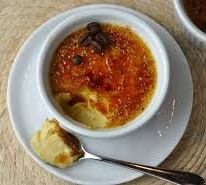 Remove salmon from marinade and place on a rack over a roasting pan. Place roasting pan in the hot oven.

Bake for 10 to 12 minutes, basting once with the marinade or until golden and white juices are just beginning to appear.

Peel and quarter potatoes. Place potatoes in a large pot. Cover with about 1 inch of water. Bring pot to a boil and let potatoes cook for about 10 minutes or so. Potatoes should be tender enough to cut with the side of a fork but firm enough not to fall apart.

Drain water from pot. Return pot to stove top and set over low heat to dry potatoes of remaining water.

Transfer potatoes to serving bowl. Drizzle a little olive oil over tops of potatoes. Sprinkle with fresh herbs and season to taste. Gently stir to blend and serve.

Trim tops of carrots, leaving about 1 inch of the “green” intact.

Wash and peel carrots. Place in a microwave safe dish.

Add water and a pinch of salt. Microwave on HIGH for 3-5 minutes, until carrots are tender-crisp.

Place carrots in pan with butter. Swirl to coat carrots with glaze.

Place pan on low heat. Continue to swirl until carrots are nicely glazed and everything is hot.

Heat oven to 350 degrees.  Grease a heavy baking pan and dust with flour.

In a large bowl, whisk together flour, sugar, baking soda, baking powder and salt. Using a fork, blend in the butter thoroughly.

Stir in one cup buttermilk and the egg. Add food coloring to the dough. Mix well using your hands to knead it several times.

Form into a round shape and place on baking sheet. Cut an a clover-leaf on the top of the loaf with a sharp knife. (A shamrock-shaped cookie cutter can be traced for a more uniformed shape).

Combine melted butter and remaining buttermilk in a small bowl. Brush over top of loaf, allowing mixture to seep into the cut.

Note: If you don’t have buttermilk, just stir 1 tablespoon white vinegar or lemon juice into a cup of milk and let sit for a few minutes. Also, bread can be made earlier in the day or the day before. Wrap tightly in plastic wrap and store in an air-tight container until ready to serve. If desires, bread may be wrapped in foil and warmed in the oven just before serving.

Note: White sugar caramelizes best. Brown sugar contains too much moisture to give that golden bubbly crunch expected of Crème Brûlée. Raw sugar is too coarse to properly bubble. If you do not have ultra fine baker’s sugar, regular sugar will do. Run it through a food processor to break down into an ultra fine grain.

Heat oven to 300-degrees. Have six ¾-cup ramekins and shallow roasting pan at the ready.

Return the cream to medium heat and bring almost to a boil. Remove from heat.

In a bowl, whisk together the egg yolks, and 1/3 cup sugar until just blended. Slowly whisk in the hot cream. Return the mixture to the saucepan over medium-low heat. Add Irish Cream and cook, stirring constantly, until the custard is thick enough to coast the back of a spoon, about 3-4 minutes. DO NOT let it boil. Pour the custard through a strainer into the ramekins, dividing it evenly among them.

Arrange the ramekins in the roasting pans. Pour very hot tap water into the pan to come halfway up the sides of the ramekins. Cover the entire pan with foil. Bake until the custards are set but the centers still giggle slightly when the ramekins are gently shaken, about 40 minutes. Remove from the oven but leave in the water bath until cool enough to handle, then lift out the ramekins. Cover and refrigerate overnight until well chilled. Remove from refrigerator about 20 minutes before serving.

Just before serving, preheat the broiler. Sift ½ cup ULTRA FINE sugar over the tops of the custards to form a thin, even layer. Place the ramekins on a baking sheet. Slip the baking sheet under the broiler, 2-3 inches from heat source. Broil until the sugar melts and caramelizes, 1-2 minutes. Turn the ramekins as needed to cook the sugar evenly.

Alternate Method: Use a small kitchen blowtorch to caramelize the sugar. Serve immediately and enjoy the crunch of the caramel, and the smooth richness custard with just a hint of Irish Cream.

Brew coffee as needed in a coffee pot or French Press.

While coffee is brewing, lightly whip cream to form soft peaks. Set aside.

Place 2 teaspoons of sugar in each of 4 mugs. Add 2 tablespoons of whiskey to each mug, then fill with coffee. Hold a spoon, rounded side up, over each mug and slowly pour the cream over the spoon, floating it on top of the coffee.

Note: For that Saint Patty’s Day Green, whipped cream may be tinted with green food gel to desired shade. A sprinkling of Green Sugar Crystals is also a nice touch. 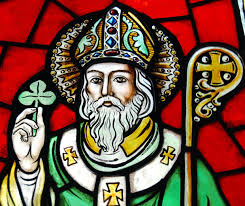