Would you believe that under all the spicy chili, creamy melting cheese, diced onions and chopped fresh peppers is a Corn Dog? Yep, this delicious casual supper is super easy, super tasty and super messy to eat. Although the Corn Dog has been around since the 1920s, I did not grow up eating Corn Dogs. We ate hot dogs. Lots and lots of hot dogs.

My Dad founded a Little League in our hometown before my brother was old enough to play. As President of the League, the snack bar trailer was kept at our house. Any cooked dogs that were not eaten at the games were up for grabs. I can remember eating so many hot dogs, for a long time afterwards even the thought of a hot dog after that made me quiver. My brother and I had made a contest of it, and ate until we could not eat anymore for fear we would explode.

I think the first Corn Dog I ever ate was in high school. That’s when friends started driving, and we would venture out into the world. A nearby railroad town had a big Farmer’s Market and Auction every Saturday. There was a trailer parked at the entrance (this was before food trucks), that sold deep-fried battered dogs on a stick. The cornbread batter was thick, and the dogs dripped of grease. But to a teenager, we had died and gone to heaven. It’s amazing what you can eat as a kid that you cannot as an adult. Hubby and I went to that same little trailer a few years back to have a bite of my youthful memories of heaven on a stick. Some things are best left to fond memory. Those Corn Dogs were just as heavy and just as greasy. I could be wrong, but I think the oil was even the same, as in never been changed all these years later.

At our house, we like baked Corn Dogs. I could say baking a battered dog is healthier, and it is. But buying those frozen dogs on a stick and popping them in the oven is so convenient and a lot less messy than making your own. When looking for Corn Dogs in the freezer section, we prefer the Real 100% Beef Dogs. The beef dog just has better flavor as far as we are concerned. This recipe relies more on condiments and less on the dog for taste, so a turkey dog or any dog would be just fine.

Heat oven to 400 degrees. Place frozen corn dogs on the baking sheet and pop into the oven for 5 minutes.

Remove sticks from corn dogs. Split dogs in half lengthwise. Place dogs, cut side up, on the baking sheet. Return dogs to the oven and bake for 15 minutes, or until heated through.

While dogs are baking, warm chili in a saucepan until bubbling.

Shred about a cup of Cheddar Cheese from a block. Freshly shredded cheese will melt easier. Dice onions and peppers. Set aside.

Once the dogs are done, plate and top as desired with chili, cheese, onions and peppers. You’ll want to use a knife and a fork to eat the dogs. 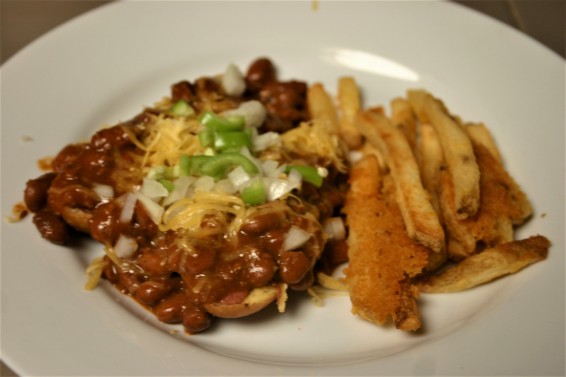 Great with French Fries for an easy, casual supper.