I know that I’ve mentioned this before, that on the Meal Planner Wednesday’s are a Wild Card Day – so anything goes. It can be as crazy or as simple as the mood strikes me. Well, within reason. After all, I plan my meals weeks in advance.

Recently while Hubby and I were in the produce section of our grocery store, we discovered something better than croutons. I don’t know if we noticed them because of the menu plan that particular week, or if the store changed their display and it drew our attention. They carry a selection of Tortilla Strips designed for soups or salad instead of croutons. The strips come in a variety of seasonings such as Sea Salt or Santa Fe, as well as different colors. The first time we tried them was as a topping for Taco Soup. I had planned to do what I normally do for tortilla strips and that’s to cut corn tortillas into small strips, then fry them up fresh. While home-made strips are nice, these store-bought strips are super convenient.

When I saw the strips, I immediate thought of a recipe for Dodger Stadium Hot Dogs that I’ve been wanting to try, but haven’t simple because I didn’t want to take the time to fry up Tortillas for something as pedestrian as hot dogs. After enjoying the strips in our soup, I knew there was no excuse for not having the dogs.

Besides, Dodger Stadium holds a special place in my heart. For me as a young girl; the real heroes of baseball were Don Drysdale and Sandy Koufax. Some might argue that we had the Oakland Athletics in our own backyard, but the A’s didn’t move from Kansas City to Oakland until 1968. By then I had lost interest in baseball. There was way too much going on in the world in 1968 to think about games. And the San Francisco Giants just weren’t my team. So when it comes to baseball, my heart belongs to the LA Dodgers.

Heat oven to 250 degrees. Coat a griddle pan with a little butter. Toast the buns lightly, wrap in foil and hold in the oven until ready to assemble the dogs.

On the now empty griddle pan, cook hot dogs until heated through and blistering. If possible, add a little water to the pan to create steam while heating the dogs. Turn as needed to prevent skins from burning. 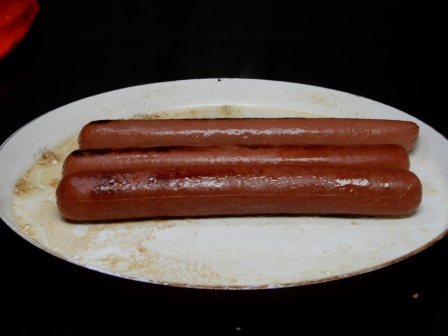 As the dogs cook, prepare the chili and Nacho Cheese. In a medium saucepan, warm chili gently over medium until heated through. Pour the Nacho Cheese Sauce into a 2-cup glass measuring cup. Place in the microwave and heat for 30 seconds. Stir, then continue to heat in 10 second intervals until hot.

When ready to serve, place hot dogs into the warm buns, top dogs with chili, pour on the Nacho Cheese, followed by Pico de Gallo and sour cream. Top with sliced Jalapeño Peppers as desired. Sprinkle with tortilla strips for added crunch. Serve and enjoy. Great with some corn chips dipped in Nacho Cheese. 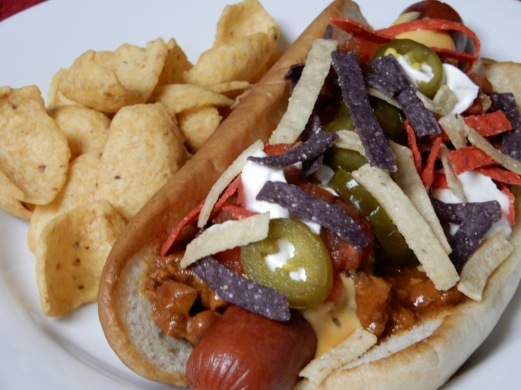