Today is Titanic Remembrance Day. No surprise there, for it was in the early morning hours of April 15, 1912 that the unsinkable Titanic ended her maiden voyage at the bottom of the sea. She wasn’t the first ship to sink, nor the last. Yet the Titanic is that tragedy that we seem to be drawn to, seeing her through Rose-Colored glasses and a romantic heart.

Her journey began on May 31, 1911; when the Titanic’s immense hull – the largest movable man-made object in the world at that time – made its way down the slipways and into the River Largan in Belfast, Ireland. More than 100,000 people attended this historical launching.

On April 10, 1912 the Titanic set sail with an estimated 2,240 or so souls on board. Records vary as to the exact count and classification; but it is believed 1,317 were known passengers. The largest ground were among the third class, with about 709, followed by first class of 325 with second class in the smallest group of 284. Records indicate that the Titanic was considerably under her full capacity; as she had accommodations for 2,453 passengers – 833 first class; 614 second class and 1,006 third class.

When it comes to recreating the Last Supper of the Titanic, one of the dishes that seems to be most popular is the Poached Salmon. The differences between First, Second and Third Class menus is yet another reflection of Class Separation. 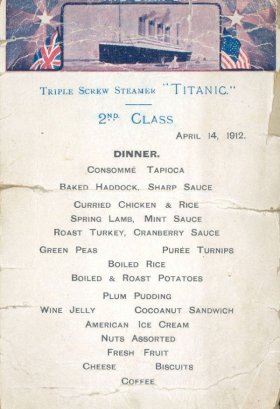 Those were the days of ocean liners. Today’s ships pale in comparison when it comes to luxurious appointments and attention to richly crafted detail. That’s just my opinion. I happen to be a huge fan of pomp and circumstance; of proper etiquette and rules governing social behavior. I’m not talking as these relate to “class” in a financial sense, but as a more civilized behavior toward one another. Does that make sense? I suppose what I’m really talking about are manors. Please and thank you. Put your napkin on your lap. Dress your best for Sunday Church. That sort of thing.

I’ve often felt out of step. Sometimes I think I am a transplant from another time. And once again, I have wandered off subject. Today we remember the Titanic.

If this recipe looks familiar, you are right. I shared it once before two years ago. A dish this delicious, this classy deserves repeating.

Peel and slice the carrot, set aside. Peel and chop the onion, set aside. Chop the parsley.

In a large pot combine water, carrots, onion and parsley. Add peppercorns, bay leaf and wine. Season with salt. Bring pot to a boil over high heat. Reduce heat and simmer for 30 minutes.

Strain Bouillon into an air-tight container and cover tightly. Refrigerated, Court Bouillon will keep for up to a week.

Separate the egg whites from the yolks. Reserve whites for another use if desired, set yolks aside.

Cut lemon in half, reserve one half for another use. Juice remaining half, set aside.
Chop fresh dill, set aside.

Whip the heavy cream until lightly whipped and just beginning to thicken with soft peaks. Set aside.

Melt butter over medium-low heat. Allow the butter to melt undisturbed. Using a spoon, skim froth from the surface of the melted butter and discard. Allow butter to cool slightly.

On top of a double boiler or heat-proof bowl, whisk water and egg yolks together with salt and pepper for 30 seconds or until pale yellow and frothy. Over barely simmering water, whisk mixture for 3 minutes or until it draws a ribbon for 5 seconds.

Remove pan from heat; whisk in warm butter, 1 tablespoon at a time, until sauce begins to thicken. Still whisking, pour remaining butter into sauce in a slow steady stream.

Stir in lemon juice and dill. Allow the sauce to cool slightly. Gently fold in whipped cream. Adjust the seasoning to taste. Keep warm by setting over a pot of warm water.

Thinly slice the cucumber, set aside until ready to serve. Pluck some of the dill for garnish. Set aside.

Poach fish for 3-5 minutes or until opaque on the outside and still coral-colored in the center.

When ready to serve, line cucumber slices on a large platter or individual plates. Center salmon on the platter or plates between the rows of cucumber. Drizzle with some of the Mousseline Sauce. Garnish with Dill. Pour remaining sauce into a gravy boat, and pass the sauce at the table as desired.