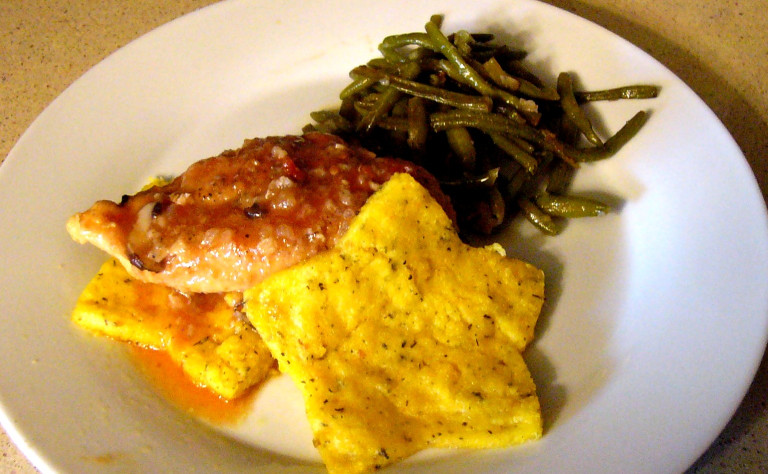 It is said that Chicken Marengo was created on the battlefield by Napoleon’s Swiss chef, a fellow named Dunand.  Napoleon was of the habit of not eating until the end of a battle, believing that what he ate could affect the outcome of the fight.  Rather than eat anything at all and tempt fate, he went hungry. It seems Napoleon wasn’t alone in this strange habit, others likewise believed that food could somehow change the course of history.

As you can imagine, Napoleon was famished when he withdrew victoriously from the field of conflict against his foes, the Austrians. Not a patience man, Napoleon demanded that he be fed at once. It was up to Chef Dunand to create a meal fit for a victorious Emperor. Only one problem stood between the Chef and his creation – a lack of supplies. One account claims that the supply wagon had fallen behind, so the chef had no supplies from which to feed Napoleon. Another account claims that during the battle itself the supplies were ceased by the Austrians. This latter account seems off – if Napoleon were victorious, wouldn’t it seem logical that they regained control of the food supplies? The only way that the Austrians having control over the food supply would have an impact is if, fearing defeat, they destroyed all the food supply including their own.  And that would only make sense if the battle were fought miles from nowhere or a desert or jungle or anyplace else. The fact of the matter is that on  June 14, 1800 on the outskirts of Marengo, a city in the Piedmont region of Northern Italy Napoleon led his troops to victory over the Austrians. Everything else surrounding Chicken Marengo and it’s creation is questionable. Still, it is a colorful story of Dunand’s creative ability. Whatever the reason, Dunand is reported to have sent some men to scour the countryside and nearby farms for supplies.  They returned with a few chickens, some tomatoes, old bread, garlic, white wine, Cognac, a few eggs and crawfish from a nearby steam.  From this Dunand created Chicken Marengo, or so the story goes.  It seems only fitting, as June fades from view, that I share with you my take on Chicken Marengo.

To make Chicken Marengo in the true tradition of the dish, it should be served over day-old toast and topped with a fried egg.  Today, most renditions skip the egg and crawfish all together and those that don’t  serve them on the side.  As for the toast – it’s still a part of the dish in most recipes.  Mine is served with Polenta Stars.  Since the dish itself is French, named after a battle that took place in Italy, I like the idea of combining both French and Italian cuisine on one plate.

In a large nonstick saucepan, heat chicken broth to a boil; slowly stir in cornmeal.

Reduce heat to low; cook, stirring frequently, 30 minutes or until mixture is very thick and pulls away from side of pan. Mixture may be lumpy.

Remove Polenta from refrigerator. Use a cookie cutter to cut different size star or other desired shapes from Polenta.

Spray large nonstick skillet or griddle with cooking spray; heat over medium heat until hot. Cook Polenta about 4 minutes per side or until lightly browned. Keep warm until ready to serve.

Sprinkle the skinned chicken pieces with salt and pepper, then dredge in the flour. Melt the butter with the olive oil in a heavy skillet on medium heat. Divide chicken into two batches. Brown the first batch of chicken on all sides and remove from the skillet.

Add a little butter with olive oil to the skillet. Brown second batch of chicken on all sides and remove from skillet.

When all the chicken has been browned, add the onions and garlic to the skillet and cook on medium heat, stirring occasionally for 5 minutes.

Add the white wine and scrape any bits clinging to the bottom and sides of the skillet into the wine.

Add the tomatoes, bouillon cube, and dried thyme, then the browned chicken pieces. Cover the skillet and simmer on low heat for 30 minutes.

Add the mushrooms and continue cooking for 10 minutes.

Stir in the cognac, cook 5 minutes longer. Remove from heat, stir in the chopped herb and serve.