This is a cast iron dish that is still a work in progress. I wasn’t even going to share it just yet, especially since I just gave you a No-Bean Nacho recipe last week. After much consideration and debate, I decided to go ahead and share. Maybe you have some ideas that would help this casual skillet supper hit its mark.

My guys thought it was fine, with plenty of heat from the peppers still growing in our garden. (I know, late in the year, but we’re thrilled to have them). I thought it needed more cheese – maybe the Nacho Cheese that comes in the can for the first two layers, with shredded cheese on top.

The original recipe called for a pound of ground beef and just two cups of cheese. I knew right away the cheese had to be more. One of the best parts of home-made nachos is the cheese. As for the addition of ground chorizo, what can I say? We love good chorizo – the stuff we make ourselves when we have the time or the stuff we get at the meat counter of a Latino market. In other words, the real deal.

I’m actually kicking around the idea of making some chorizo for my Dad this Christmas. But that would be a subject for another day. The chorizo in this recipe is strictly optional. If you aren’t going with the chorizo, I would increase the ground beef and spice things up with a few tablespoons of taco seasoning. But that’s just me.

Crumble and brown the meats together in a large cast iron skillet, breaking apart as it cooks. Drain and set aside. While the meat is browning, slice green onions and set aside.

Whip out the skillet used to brown the meats. Layer 1/3 of the tortilla chips in the bottom the skillet. Sprinkle with about 1/3 of the meat mixture, then 1/3 of the green onions and 1/3 of the cheese. Repeat with a second and third layer. Set skillet aside.

Slice peppers and dice the tomatoes. Add the jalapeños and tomatoes to the top of the nachos.

Cover the skillet loosely with foil. Place in the oven and cook until the cheese is melted, 8 to 10 minutes.

While the nachos are baking in the oven, chop Cilantro and set aside. When Nachos are ready to serve, sprinkle with chopped cilantro. Serve straight from the skillet.

Garnish as desired with salsa, guacamole and sour cream. 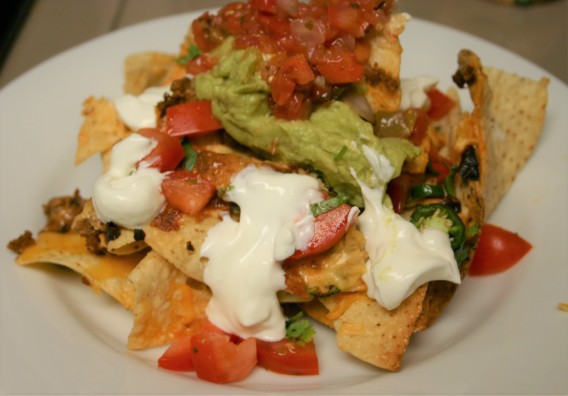