Goulash makes me think about galoshes – you know – rain boots. When Kiddo was a little kid (around 1st grade) and living in the middle of a desert in Nevada; the students were asked to identify which shoes children should wear when it rains. They were shown three pictures – flip-flops; sneakers and galoshes. Almost all of the children picked the sneakers – especially since most of them had never seen galoshes before. Southern Nevada gets an average of 4″ of rain a year – and most of that falls in a day! Special shoes for rainy days just never occurred to these children of the desert.  The same standardized test asked this question: “It’s getting dark outside. What should the driver of this car do?” As adults, we all know the answer – turn on the headlights. Kiddo’s response is one I will never forget. “Go home because it’s bedtime.” Hey, it made sense!

Now where were we? Oh yeah – Goulash is an all around comfort food. It’s also a great campfire meal, utilizing a lot of canned ingredients that are easy to pack and some ground beef that takes up very little space in a cooler. Throw all the spices into a sandwich bag marked “Goulash” and there you go. A great supper for that first night under the stars. (In case you are wondering about the soy sauce – save a packet from your next Chinese take-out).

While I’ve reduced my recipe for our family of three, this recipe can easily be doubled for a larger group gathered round your campfire or dinner table.

In a large Dutch oven, cook and stir the ground beef over medium-high heat, breaking the meat up as it cooks, until the meat is no longer pink and has started to brown, about 10 minutes. Skim off excess fat, and stir in the onions and garlic. Cook and stir the meat mixture until the onions are translucent, about 8-10 more minutes.

Stir in the macaroni, cover, and simmer over low heat until the pasta is tender, about 15 minutes, stirring occasionally. Remove from heat, discard bay leaves, and serve. 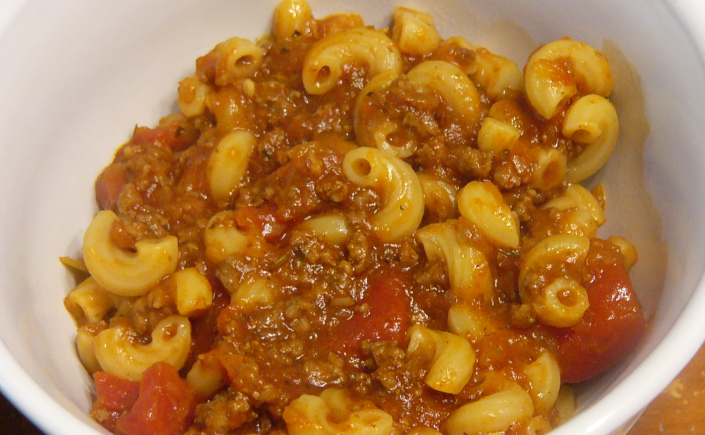 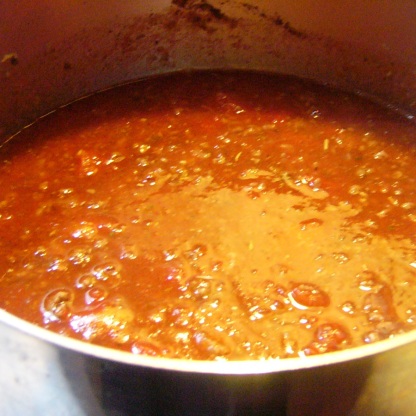